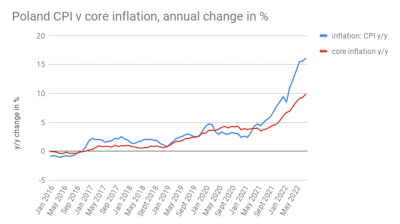 Core inflation growth tracks the expansion of consumer prices (CPI), which also accelerated in August, coming in at 16.1%, a gain of 0.5pp versus the preceding month. Accelerating CPI and core inflation dashed hopes for price growth peaking in 2022.

Analysts expect a new inflation surge in early 2023 after new prices of electricity and heat will have taken effect.

The government said earlier last week that it would freeze electricity prices for households and has also capped growth of household heating costs but more expensive energy will still push up prices of goods and services.

That may not imply that the National Bank of Poland (NBP) will return to more aggressive monetary policy tightening, analysts say.

“There may be no more rate hikes as the ‘real’ inflation target deviates significantly from the legal target [of 2.5%],” ING said in a comment.

The central bank raised its reference interest rate 11 times in as 12 months between October and September from the all-time low of 0.1% to 6.75%.

But the rate hikes have been coming amidst the government’s expansive policy mix in the run-up to elections, due in the autumn of 2023.

“Currently, the overall policy mix is only slightly restrictive despite inflation at 16.1% y/y,” ING said, adding that the NBP’s unorthodox approach to inflation could see rates going down in 2023 and then back up in 2024.