Poland’s CPI growth picks up to 2.7% y/y in January 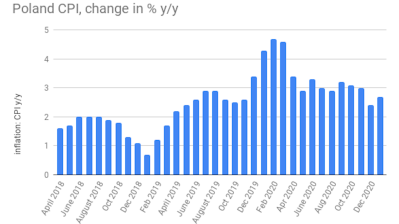 Polish CPI grew 2.7% y/y in January, the annual growth rate adding 0.3pp versus the annual reading in the preceding month, the statistical office GUS said in a preliminary estimate on February 15.

The January reading is routinely based on the previous year’s CPI weights and therefore only broken down by the three main price segments. Still, says, Bank Millennium, “based on available data, the [rise in] inflation is … the effect of a slightly faster than expected rise in prices of food and housing.”

The January increase in the CPI “shifts the annual inflation path up and the headline CPI will likely remain above the central bank’s target throughout the year. We revise our full-year 2021 inflation forecast up to 3%,” Erste said in a comment.

Other analysts offer a shorter forecast horizon but still predict elevated price growth. “It is likely that CPI will temporarily breach the NBP target band in Q2, rising above 3.5% y/y. Later in the year we expect some easing,” Raiffeisen Bank wrote.

That should not affect Poland’s currently super-accommodative monetary policy, which has interest rates at just 0.1% in order to help economic recovery after the COVID-19 (coronavirus) pandemic.

“Despite increased inflationary pressure that will persist also this year, we do not expect any changes in monetary policy outlook. We see rates remaining stable until the end of 2022, as the NBP will continue to support economic recovery,” Erste said.

In monthly terms, CPI expanded 1.2% in January, a major pick-up after expanding just 0.1% on the month in December. That is due to growth in some administered prices – such as waste disposal - and introduction of a power fee that pushed electricity prices up.

The January data will be revised in March based on new CPI weights.

Russian President Vladimir Putin's popularity ticked up 1pp in February to 65%
15 hours ago
Russian business confidence bounces back strongly in January
16 hours ago
Putin’s trust rating improves 3pp to 32%, Navalny falls 1pp to 4% despite protests
2 days ago
Romania’s public debt-to-GDP ratio up 12.4pp y/y to 47.7% at end-2020
3 days ago
Grey economy almost a third of GDP in Bosnia, Montenegro and Serbia
5 days ago