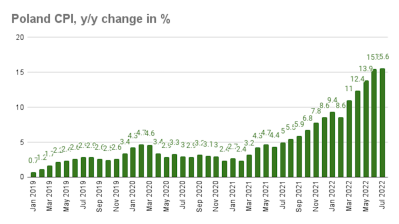 Polish CPI growth came in at 15.6% y/y in July (chart), picking up 0.1pp versus June, the statistical office GUS said on August 12.

The reading is a slight upward revision of GUS’s flash estimate published earlier this month, which assessed CPI growth at 15.5%. The clear easing of the index’s y/y growth rate – versus 1.6pp in June compared to May – suggests that inflation is “losing steam,” bank PKO BP said in a comment.

“We think that inflation is going to keep until the end of 2022,” PKO BP also said, although adding that one final bout will come in early 2023 on the back of administrative changes to taxes and energy tariffs.

“Core inflation should enter a sustained downward trend in August or September, which should let the Monetary Policy Board [RPP, the central bank’s rate-setting body] end the interest rate hike cycle as soon as September,” PKO BP said.

But the macroeconomic and geopolitical volatility is so big that some analysts do not rule out quite different scenarios.

According to Credit Agricole, the drop in inflation will be too incremental for the rate-setter to ignore.

“We believe that persistent inflation, persistently high wage growth and pressure to weaken the zloty exchange rate due to rising interest rates in the United States and the Eurozone will induce the RPP to raise interest rates further,” the French bank said in a comment.

“At the next two meetings the MPC will raise interest rates by a total of 75bp, and the cycle of increases will end in October at 7.25%,” it added.

So far, the NBP raised its reference interest rate from 0.1% to 6.5% between October and July. The central bank is in summer recess in August.

Inflation and the central bank's fight with it are now a serious political challenge for the government, as price growth is eating into Poles' incomes, while the NBP's monetary tightening has pushed up mortgage repayments significantly.

An economic slowdown is also on the cards. Poland’s GDP growth is expected at just 1.5% in 2023 after growing a robust 5.2% this year.

Prices in the transport segment once again led growth in July, expanding 27.7% y/y, GUS showed in the breakdown of the data. That included a gain of 36.8% y/y in the fuels segment. In both segments, however, the pace of growth was clearly weaker than in June.

On the other hand, prices in another vulnerable segment, housing and energy, accelerated growth to 25.3% y/y in July, including massive increases of 131.2% y/y for heating fuels and 44.9% y/y for natural gas.

In m/m terms, price growth came in at 0.5%, the weakest increase since August 2021, except for February, when the monthly increase was dampened by the government’s decision to lower VAT rates.

Russia’s industrial output decline slows to only 0.1% in August
1 day ago
Poll shows Putin's popularity took hit in September but remained as high as 77%
1 day ago
Russia on track to have a record-smashing grain harvest
3 days ago
Bosnia posts annual CPI inflation of 16.8% y/y in August
4 days ago
IMF sees Romania’s economy growing by 4.8% in 2022, analysts are even more bullish
4 days ago