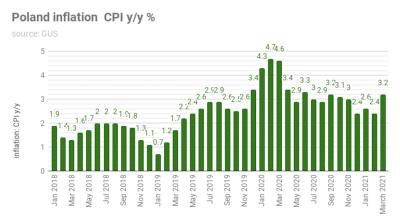 The Polish CPI expanded 3.2% y/y in March, the inflation rate picking up 0.8pp versus the preceding month, statistical office GUS said on March 31.

The sharp increase surprised the market - which expected growth of 3% at the most – shifting this year’s inflation trajectory further up in effect. The main drivers were fast-rising prices of fuels – owing to dynamic growth in oil prices – as well as core inflation, which increased an estimated 3.9% y/y in March, up 0.2pp versus the preceding month.

Food prices increased 0.5% y/y in March, the breakdown of the data shows. Growth in energy prices came in at 4.2% y/y in the third month, while prices of fuels added 7.6% in annual terms. Detailed inflation data will be released in mid-April.

Inflation is now expected to remain on an elevated level throughout May, owing to a very low base from the same months in 2020, when the first shock of the coronavirus (COVID-19) pandemic depressed economic activity.

“In our view, the CPI will exceed the upper band of the central bank’s inflation target [in April-May] at 3.5% and will most likely move above 4.0% y/y in that period,” Erste said in a comment on GUS figures.

Summer should bring a brief and slight respite from inflation before the CPI returns toward 4% y/y in the second half of the year, according to Erste.

Still, the National Bank of Poland is expected to remain on hold and keep the target rate unchanged at 0.1% until at least the end of Governor Glapinski’s term in mid-2022 and likely until the end of next year, analysts say.

That said, the outlook on Poland’s monetary policy could soon begin to factor in an increase in the rates if inflation grows higher, a risk underlined by March’s surprise rise in core inflation.

“Despite the higher CPI outlook we still believe however that the NBP will indeed refrain from hikes although clearly the risk is now tilted to an earlier move,” Raiffeisen Bank said.

Earlier speculation of a rate cut is all but gone now in the context of what appears an incoming period of fast growth of the CPI.