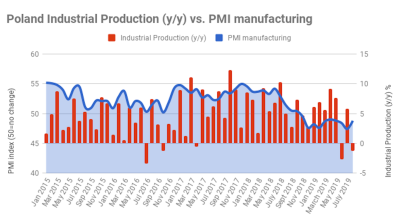 The August fall is a surprise not predicted by analysts. Car manufacturing and output in the refining industry drove the contraction, according to ING. “Production in both sectors is likely to return to a more standard level in the next few months,” the Dutch bank said.

More disappointing proved production in sectors related to construction, as manufacture of metal products and non-metallic minerals remained weak on the back of poor performance of the real estate market, road and rail infrastructure investment and troubles at metallurgical companies.

The August reading of industrial production points to a further slowdown in GDP growth in the third quarter to 4%-4.1% y/y, according to ING.

Earlier predictions for a still slower expansion of about 3.5% – because of sluggish Germany and the reduced activity in the Eurozone in general – had to be revisited after the PiS government announced a multi-billion fiscal stimulus programme in late February.

In adjusted terms, industrial production grew 1.7% y/y in August, compared to 3.7% y/y in the seventh month.

Broken down by sector, output in manufacturing fell an unadjusted 1.3% y/y in August, compared to a growth of 6.6% y/y the preceding month.

Output also fell 8.4% y/y in the mining and quarrying sector in August, after retreating 5.1% y/y in July. In the utility segment, production fell 0.3% y/y after retreating 1.2% y/y the preceding month.

Production only grew in the water supply and waste management segment, where growth came in at 6.6% y/y in the seventh month, compared to an expansion of 10.9% y/y in June.