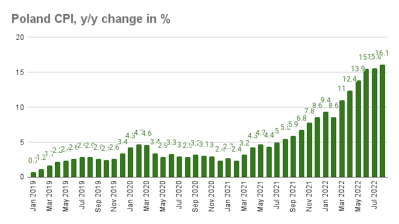 Polish CPI growth came in at 16.1% y/y in August (chart), picking up 0.5pp versus July, the statistical office GUS said on August 12.

The reading confirms GUS’s flash estimate published earlier this month and affirms that Poland’s inflation woes are far from over and are poised to get worse.

“It’s hard to expect a drop in the annual CPI before the end of the year. In the coming months, the economy has yet to absorb the energy shock,” ING Bank Slaski said in a comment on GUS figures.

Another inflation surge will come in early 2023 after new prices of electricity and heat will have taken effect. The government said earlier this week that it would freeze electricity prices for households and has also capped growth of household heating costs but more expensive energy will still push up prices of goods and services.

“Inflation will peak at 17.5% y/y in October and will remain above 16% until February,” Credit Agricole said.

Persistent inflation could prompt the National Bank of Poland (NBP) to deliver yet another hike of its reference interest rate despite the current mood – after a modest increase of 25bp to 6.75% earlier this month – being that the monetary tightening cycle is over.

Prices in the transport segment once again led growth in August, expanding 19.5% y/y, GUS showed in the breakdown of the data. That included a gain of 23.3% y/y in the fuels segment. In both segments, however, the pace of growth was clearly weaker than in July.

On the other hand, prices in another vulnerable segment, housing and energy, accelerated growth to 27.4% y/y in August, including massive increases of 156.9% y/y for heating fuels and 36.6% y/y for natural gas.

Inflation and the central bank's fight with it are now a serious political challenge for the government, as price growth is eating into Poles' incomes, while the NBP's monetary tightening has pushed up mortgage repayments significantly.

An economic slowdown is also on the cards. Poland’s GDP growth is expected at just 1.5% in 2023 after growing a robust 5.2% this year.

In Hungary, the inflation index picked up to 15.6% y/y in August, a 24-year high. Slovakia also saw inflation accelerate to 14% y/y.