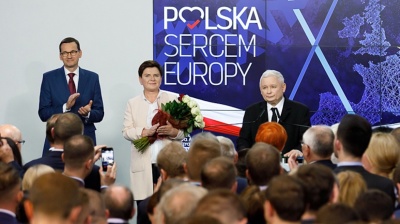 Not resting on his laurels: PiS chairman Jaroslaw Kaczynski calls for hard work ahead of Poland's autumn general election when "the decisive battle for the future of our homeland will take place”.
By Wojciech Kosc in Warsaw May 26, 2019

Poland’s ruling party Law and Justice (PiS) has comfortably won the election to the European Parliament in Poland, scooping 46.01% of the vote, results from 90% of election commissions across the country showed early on May 27.

The result is much better than most polls published ahead of the election and constitutes a major setback to the opposition. The European Coalition – an umbrella name of five centrist and centre-left parties – won just 37.87% of the vote as its hopes of winning a premium for overcoming differences in the name of defeating PiS were all but dashed.

A record-high turnout of 45.42% – compared to 23.8% in 2014 – did not help the opposition, despite expectations that it would. Neither did sounding the alarm over PiS’ illiberalism or the support of major media.

The future of the European Coalition appears uncertain now and the group’s prospects of winning the general election in the autumn have also diminished considerably.

PiS, on the other hand, has regained momentum after a disappointing run-up to the vote. The ruling party struggled to respond to a documentary film about paedophilia cases in the Polish Catholic Church – PiS’ close political ally – that went viral to millions in Poland.

“We have won and let that make us work hard ahead of the general election when the decisive battle for the future of our homeland will take place,” Kaczynski told the enthusiastic crowd on election night.

“Poles want a good change not just in Poland but in Europe as well,” tweeted PM Morawiecki.

PO’s leader Grzegorz Schetyna told supporters on election night the result was promising for a successful challenge to PiS in the autumn.

The united forces of PO, the centre-right party of Poland’s rural communities PSL, the centre-left SLD and the Greens, still did not manage even to close in on PiS in a vote that had appeared more difficult for the Eurosceptic ruling party than for the EU-enthusiastic liberals and centrists.

Newcomers and challengers of the status quo must also have come out disappointed.

The centre-left Wiosna (Spring) won only 6.02%, far below most polls. It is technically the "third political force in Poland" – as its leader Robert Biedron put it on the election night – but far from key to lasting change, it seems.

The far right-wing grouping Konfederacja ultimately failed to cross the 5% threshold that guarantees winning seats in the EP in Poland, having won 4.55% of the vote. An exit poll initially showed Konfederacja was above 6% with possibly three MEPs.

Kukiz 15, a loose right-wing group self-describing as “anti-systemic,” won 3.71%. The social democrats from Left Together also disappointed at 1.23%.

All parties will now surely regroup for the all-important general election due in the autumn.

PiS will be looking to secure a majority for a second consecutive term so as to avoid a potential coalition with the far right.

Similarly Wiosna and Left Together will strive to bulk up enough to become coalition partners of PO, if the liberals manage to draw conclusions from the European vote and move ahead of PiS for the first time since local elections in 2014, PiS’ first victory in the current election cycle.

Given the opposition’s poor results overall, however, an alternative to the ruling populists is hardly in sight at the moment.