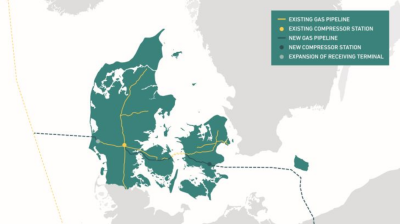 The Baltic Pipe has suffered only minor cost overruns and its construction is running precisely on schedule. / Energinet
By Wojciech Kosc in Warsaw June 7, 2022

For years, Poland had said that it was going to end the contract with Gazprom on its expiry at the end of 2022 – the same time a new pipeline, called the Baltic Pipe, becomes operational.

Gazprom ending supplies early made little difference – except that Poland is now making noises about suing the Russian company for a breach of contract. But supply-wise Warsaw says the Baltic Pipe will step in exactly where Gazprom left.

What is the Baltic Pipe anyway?

Touted as the “independence pipe”, the Baltic Pipe is about to link the gas-rich fields of the Norwegian Continental Shelf to Poland via Denmark.

Technically the roughly €1.5bn pipeline will not tap directly into the Norwegian gas deposits but will be an offshoot of the existing Europipe II gas line connecting Stavanger in Norway to Dornum in Germany on the North Sea bed.

The Baltic Pipe offshoot will run east of Europipe II on the bottom of the North Sea until making a landfall near the western Danish town of Varde. Then it will run through Denmark until going back underwater – in the Baltic Sea this time – off Faxe on the island of Zealand before turning south for another landfall in Pogorzelice in Poland.

The capacity of the pipeline is about 10bn a year, roughly the equivalent of Gazprom’s supplies.

Perhaps unusually for big infrastructure projects, the Baltic Pipe has suffered only minor cost overruns and its construction is running precisely on schedule.

Pump up the (gas) volume

Building a new pipeline is not the same as having it pump gas.

So far, says Gaz-System, Poland’s state-owned operator of the gas grid, Baltic Pipe’s capacity has been booked up to 80% and there is enough time to push that up to 100% before demand begins climbing back up in the cold season.

That was the message delivered by Gaz-System’s CEO Artur Stepien last week, apparently in response to alarmist media reports that put the figure at 50% instead.

Most of the booked capacity is by PGNiG, Poland’s state-controlled oil and gas company, which operates several concessions on the Norwegian Continental Shelf from which the company extracted 770 mn cubic metres (mcm) of natural gas in the first quarter, growing the volume by 250% y/y.

PGNiG says that the real growth in gas production volume is still ahead. The company wants to eventually pump up to 4 bcm of gas as part of the 8 bcm of the Baltic Pipe’s capacity it has booked.

“Why are we not filling it all? If we used each interconnector in this way, we could double the amount of gas imported to Poland in relation to the needs. Diversification is also the ability to choose, not to use an option to the maximum, but to leave some space to take advantage of [future opportunities] while securing the demand,” PGNiG’s deputy CEO Robert Perkowski told Biznes Alert on May 19.

Piece of the puzzle

The Baltic Pipe is just one – even if a key – element of the gas supply puzzle that Poland has been putting together for some time now.

On top of gas flowing through the Baltic Pipe, Warsaw expects to meet its annual demand of roughly 20 bcm with LNG imports via the terminal in the north-western port of Swinoujscie, which will soon be capable of handling 7.5bcm of gas annually.

Poland also has some domestic production, amounting to roughly 3 bcm a year. The country has also a number of gas interconnectors – links between national gas grids of tis neighbours – with Germany, Lithuania, Slovakia, and the Czech Republic, allowing it receive, or send, gas under the EU’s common gas market regulations.

On top of domestic production and imports, Poland still has plans to build more gas infrastructure to try to become CEE’s gas hub. To that end, a floating LNG terminal is planned in the Gdansk Bay and, possibly, another one in the context of expected rise in gas demand from Czechia and Slovakia.

The plans are causing friction with the pro-climate movement, which says that betting too much on gas – regardless of its origin – unnecessarily locks Poland into fossil fuels. The government’s response has been that ensuring security of supply must be the key objective before relying on renewables and nuclear becomes a reality.

Poland has also strived to maintain a very high level of gas storage. At nearly 96% today, Polish gas storage tanks are the most-filled in the EU.

“With the current level of supplies to the European market, Poland will be able to import gas from outside Russia not only through the LNG terminals in Swinoujscie and Klaipeda and the Baltic Pipe gas pipeline, but also from Germany via the reverse of the Yamal gas pipeline and [also via] gas pipelines from the Czech Republic and Slovakia,” Biznes Alert wrote in an analysis.

Russian supplies could be cut off entirely as a result of the EU’s plans to end dependency on Russia, making delivers from outside of Russia crucial.  That is when the Baltic Pipe’s strategic importance could play out in full.

Kazakhstan’s food security hopes for the world undermined by food insecurities at home
6 hours ago
NEO: Why copper mining must clean up its act
8 hours ago
The birth of a Kazakh banking empire: ATF Bank
1 day ago
CEPR's action plan for Ukraine's wartime economy
1 day ago
Missiles or sabotage: What caused the explosion at the Russian airbase in Crimea?
4 days ago