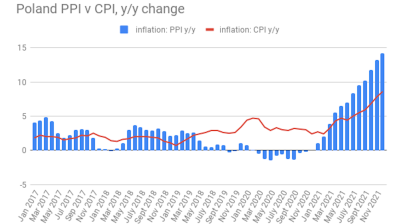 The PPI climbed to the highest point since the late 1990s and the growing prices in the industrial sector will be reflected in higher consumer prices, driving up the CPI, the headline inflation index. In monthly terms, the PPI grew 0.8% in December after a revised 1.4% m/m the preceding month, GUS data also showed.

The PPI inflation may be about to peak, analysts say.

"The structure of producer price growth shows that the fuel price shock is starting to fade and the price dynamics in this category is slowing down. If there are no more commodity shocks, the upward pressure on retail goods prices may come to an end," state-controlled bank PKO BP said.

The NBP already increased interest rates three times in October-January from an-all time low of 0.1% to 2.25%. The target level is currently seen at 3% at least in 2022, although the NBP has recently hinted that even 4% is not out of the question.

The PPI data breakdown shows that prices in the most-weighted manufacturing segment grew 13.7% y/y in December, the same as in the preceding month.

Electricity, gas, and utility prices expanded 16.2% on the year in December after a revised expansion of 10.4pp in the preceding month. The water supply segment saw prices ease 0.3pp to 4% y/y.

The index declined 0.7% m/m in mining and quarrying while growing 0.2% m/m in manufacturing. The index also expanded 5.4% m/m in the utility segment and 0.2% m/m in water supply.

Uzbekistan hit twice in a week by Ukraine war sanctions

An upbeat data release by the Russian statistics agency Rosstat, suggests that Russia’s economy is doing better than expected. Capital Economics has revised its estimates for the GDP contraction in the first quarter down from -15% to -10%.

Russian economy stable in May, but demand and income contraction deep
16 hours ago
CEE Economic Sentiment Indicators fall on polycrisis woes
19 hours ago
Europe’s gas storage on track to meet 80% full by start of heating season
1 day ago
Kosovo’s population dropped to 1.77mn in 2021 as emigration outweighed natural increase
2 days ago
North Macedonia’s PPI jumps 21.7% y/y in May
2 days ago