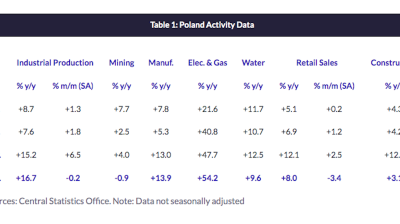 Polish economic growth will likely turn out to be the strongest in emerging Europe at some 6.8% y/y, the London-based economic analysis company Capital Economics said on January 24.

The forecast is based on the most recent high-frequency data covering industrial production and retail sales, even though the latter is showing the first signs of a slowdown due to galloping inflation putting households off spending.

“One disappointment was the sharp slowdown in retail sales growth, from 12.1% y/y in November to 8% y/y in December. Sales slumped 3.4% in seasonally-adjusted m/m terms and are consistent with consumer surveys showing a deterioration in confidence at the end of last year,” Capital Economics wrote in an analysis.

“The surge in inflation, which hit 8.6% y/y in December, has eaten into households’ purchasing power and caused real wage growth to slow sharply. Retail sales growth slowed from 3% q/q in Q3 to 2% q/q in Q4,” the analysts added.

Industry shined in contrast, with output growth picking up from 15.2% y/y in November to 16.7% y/y in December.

“In seasonally-adjusted month-on-month terms, production fell 0.2% but this followed a 6.5% rise in November and the consensus of analysts expected a much sharper fall. Overall, industrial output expanded by 6.9% q/q in Q4,” Capital Economics said.

“The strength [of industrial production] was largely driven by the energy sector, with electricity and gas production rising 54.2% y/y, most likely due to a ramp-up of coal production ahead of winter. But manufacturing also remained strong and there are signs that supply issues that have weighed on the auto sector are starting to ease,” the London-based company said.