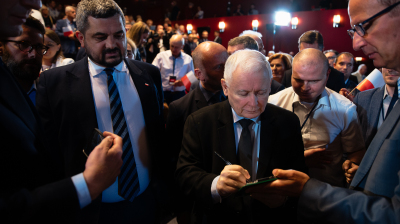 Poland is ready to take on the European Commission over its refusal to release funds from the pandemic recovery fund, the country’s top figures, including chairman of the ruling Law and Justice (PiS) Jaroslaw Kaczynski, have said in the past few days.

Kaczynski sounded the battle call in a strongly-worded interview for the government-friendly W Sieci weekly on August 7, saying “we have shown maximum goodwill, but [our] concessions have yielded nothing”.

Kaczynski, who despite holding no government position is Poland’s de facto leader, referred to tweaks in judiciary reforms that Warsaw made in order to meet so-called milestones set out by the Commission to enable the release of nearly €36bn in grants and loans from the EU’s pandemic recovery fund.

“There was an agreement – we kept it, she [Commission’s President Ursula von der Leyen] did not,” Kaczynski said.

The key part of the changes was dismantling the so-called Disciplinary Chamber of the Supreme Court.

The Commission – armed with rulings of the bloc’s top court – said that the Disciplinary Chamber was lacking in impartiality and independence, as it was stacked with judges appointed by the National Council of the Judiciary (KRS), a body politicised by the ruling majority. This created a risk that the ruling parties could indirectly use the chamber to punish judges who did not follow their wishes.

Poland replaced the Disciplinary Chamber with a new body, the Chamber of Professional Accountability.

But critics – including von der Leyen and the Commission’s Vice President Vera Jourova – said in more or less direct terms that the change was merely cosmetic and did not address the underlying problem: that the judges on the new chamber were still appointed by the KRS.

Poland also has not reinstated suspended judges, another milestone on which the release of the funds hinges.

Addressing the Commission’s grievances would not only turn on the green light for the release of the recovery fund money but also stop the daily fine of €1mn imposed nearly a year ago by the Court of Justice of the European Union for failing to fix the judiciary reforms. The total amount of the fine nears €300mn.

"Pull out the cannons and fire"

But if Kaczynski and other PiS figures are to be believed, Poland no longer wants to meet the milestones and will engage in direct opposition to the Commission, which, Kaczynski said in the interview, wants to “break Poland down and force it into full submission to Germany”.

"If the European Commission tries to push us against the wall, we will have no choice but to pull out all the cannons in our arsenal and open fire," Krzysztof Sobolewski, the party's secretary-general, told the state-owned Polskie Radio on August 8.

Sobolewski added that Warsaw could veto EU policies, build a coalition to dismiss von der Leyen and the whole Commission, or sue the Commission to yank the recovery fund money out of its coffers.

But all those tactics will take time, which PiS does not have.

The ruling party is in hot water over a number of crises: rising inflation,  the looming economic slowdown, and a likely energy crunch this winter when Polish household and companies could find themselves without coal and gas to heat homes and operate business.

All those adverse factors could soon start playing out to PiS’ disadvantage in the crucial time before elections, due in the autumn of 2023, where the opposition is going to blame PiS for all of Poland’s woes.

If the recovery fund money remains on hold, the opposition will gain another solid argument against PiS – all the more solid given Poles’ unflinching support of the EU, which has financed thousands of projects in Poland so far.

No longer the delivery man

So far, the government is still betting the money will eventually arrive.

“I am convinced that Poland will receive the funds … At most, we will have to fight a little more with the European Union when it comes to the time of receiving them,” Prime Minister Mateusz Morawiecki told a press conference on August 10.

But Morawiecki’s outlook may be at odds with the newly adopted confrontational approach to the EU, as set out by Kaczynski and others.

A recent meeting of Kaczynski with about 100 trusted figures from PiS did not feature Morawiecki or any of his close aides, news website Onet reported on August 8.

“The PM did not deliver,” a PiS politician told another news website, gazeta.pl, on condition of anonymity, referring to the government’s attempts at solving the recovery fund issues with the EU.

NEMETHY: Is the world heading towards a “polycrisis”?
Polish factories remain in downturn mode in September
Poland’s inflation unrestrained in September at 17.2%, flash estimate shows