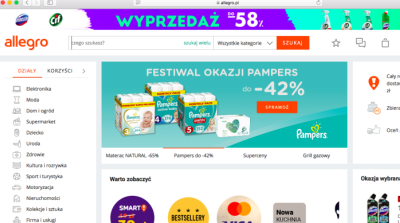 Poland’s top online retailer and auction portal Allegro announced officially on September 14 that it will carry out an initial public offering (IPO) on the Warsaw Stock Exchange.

The announcement has been expected since July, when the first speculation appeared in the news about the upcoming IPO, currently expected to take place in October.

Allegro said in a statement that it hoped to raise PLN1bn (€224.9mn) from the IPO. Apart from the new shares, the offering will also comprise a “secondary component”, in which existing shareholders, including the group’s private equity owners, as well as some of the company’s executives, will sell some stock. The final value of the offering is expected to become clear later in the process.

If all goes as planned for Allegro, the company’s stock exchange valuation could be as much as €10bn-€12bn, The Financial Times reported, citing people “close to the deal”. That would make Allegro Poland’s biggest listed company and one of the biggest on the Warsaw bourse overall, alongside gaming giant CD Projekt and foreign-owned Czech utility CEZ and banks Unicredit and Santander.

“[Allegro] intends to use the expected net proceeds of the issue of new shares, together with borrowings under a new credit facility to repay its outstanding debt in order to improve its net leverage,” the company said in a statement.

The credit facility is a new PLN5.5bn five-year senior secured term loan and a PLN500mn equivalent multi-currency revolving credit facility that will be used to refinance all of the group’s indebtedness, the company said.

The retail offering will be up to 5% of the final shares on offer in the IPO.

Allegro is owned by the private equity funds Cinven, Permira, and Mid Europa Partners, which acquired Allegro for $3.25bn in 2016 from South African owner Naspers.

UK, Canada impose sanctions on Lukashenko and his top officials
13 hours ago
Poland tightens restrictions in response to rising coronavirus cases
14 hours ago
World must tell Turkey to “get out” of Caucasus says Armenian PM
18 hours ago
French President Macron promises Belarus’ opposition leader Tikhanovskaya to do all he can to help
1 day ago
Nobel laureate and Coordinating Council member Svetlana Alexievich leaves Belarus for medical treatment in Germany
1 day ago