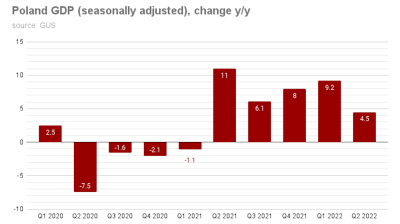 Polish GDP expansion slowed down to a seasonally adjusted 4.5% y/y in the second quarter (chart) after expanding 9.2% y/y in the preceding three months, the Central Statistical Office (GUS) said in a flash estimate on August 17.

The reading signals a much stronger than expected economic downturn is underway in Poland, analysts say. With a dramatic 2.3% q/q drop in activity – the worst in the European Union – Poland is on the cusp of at least a technical recession.

GUS’ flash estimates do not provide a detailed breakdown of growth drivers, which will be published at the end of the month.

Analysts suspect that the sharp slowdown is owed to the lower contribution of change in inventories, which shot up in Q1, as companies built stocks ahead of the crisis that is currently unfolding.

But the downturn is broader than just in the inventories segment, Krystian Jaworski, senior economist from Credit Agricole Bank Polska, said in a note.

“A factor conducive to the lower GDP growth was also … slower growth of investment due to increased uncertainty and rising interest rates,” Jaworski said.

“We believe that consumption growth also slowed between Q1 and Q2 due to deterioration in household sentiment and a decline in real wages,” the analyst added.

The Q2 flash reading points to much less dynamic growth in 2022 overall.

The GDP data show that the recession in the Polish economy started earlier and stronger than generally expected … At this stage, it seems unlikely that the average GDP growth in 2022 will be higher than 4% and above 1% in 2023,” Santander Bank Polska said.

Poor GDP data for Q2 provides some solid ground for the National Bank of Poland to end its aggressive monetary tightening cycle.

“We assume that deflationary impulses exported by China to the world and a marked slowdown in our economy will be premises for the end of the current monetary policy tightening cycle, which [the National Bank of Poland] will top up with a 25bp-50bp rate hike in September,” bank PKO BP said.

Poland’s interest rates are at 6.25% after 10 increases between October and July.