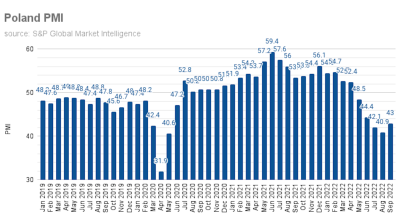 Output and new orders especially remained deep inside the negative territory in a reflection of uncertainty “not just in product markets, but amongst manufacturers themselves,” S&P Global said.

“Confidence about the future remains subdued, and firms are cutting jobs at a quicker rate as part of efforts to keep on top of costs as inflationary pressures continue to bite,” Paul Smith, Economics Director at S&P Global, said in a statement.

“Especially worrying for firms will be a re-acceleration of input cost inflation, which increased in September for the first time since March on the back of surging energy prices,” Smith also said.

Companies also reduced their purchasing activity in “response to the ongoing downward trends in sales and production, whilst also seeking to utilise existing inventories in a bid to free up working capital,” S&P Global said.

The currently adverse economic environment has Polish manufacturers looking into the future with some angst.

“Worries over the downward trend in sales, and ongoing high inflation undermined confidence” in September, the PMI survey indicated.

Polish analysts are taking S&P Global’s efforts to gauge the mood in the manufacturing sector with a pinch of salt.

“The indicator has not been a good predictor for the industry in recent months, as actual production has been on the rise,” Bank Millennium noted.

In line with better than expected performance of the industrial sector, analysts now say that the headwinds will begin growing in strength only in the fourth quarter, not in the third, as forecast previously.

“Industrial production in Poland turned out to be a positive surprise in Q3, but it is difficult to expect better in the coming quarters. We assume that GDP in the fourth quarter will shrink by 0.2% q/q, including through the downturn in the industry,” Bank Millennium also said.

As slowdown is definitely on the cards – only with its onset now to fall later in the year – the outlook is getting more complicated by accelerating inflation.

Poland’s CPI came in at 17.2% y/y in September, smashing market consensus, the stats office GUS said last week in a flash estimate. That might have the National Bank of Poland (NBP) go back to more aggressive tightening as soon as October 5, the date of the next meeting of the NBP’s rate-setters.

Whether the NBP will react to inflation data by hiking its reference interest rate more than the expected 25bp to 7% remains unclear but were the central bank to go for a bigger raise, it could further worsen conditions for the industrial sector.

At the moment, however, “PMI data support a hike of 25bp,” PKO BP noted.

Meanwhile, Poland’s industrial production picked up growth to 10.9% y/y in constant prices in August, after a gain of 7.1% y/y the preceding month, unadjusted data from statistical office GUS showed on September 19.

September industrial production data are due on October 20.

Thanks to what is shaping up to be solid first three quarters of the year, Poland is going to see its GDP expand around 4%-5% in 2022.

Expansion is then expected to ease to roughly 1%-3% in 2023, with major caveats attached to the outcome – if any – of the war in Ukraine and the long-term effects of the NBP's aggressive monetary tightening campaign.