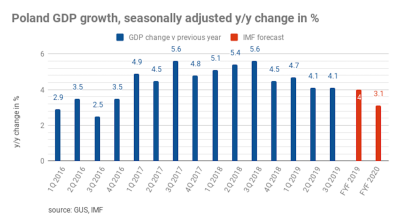 Polish GDP growth came in at an unadjusted 3.9% y/y in the third quarter, a preliminary estimate released by the Central Statistical Office GUS on November 29 showed.

Domestic demand drove the headline result in July-September, although the pace of its growth slowed down to 3.3% y/y versus 4.6% y/y in the second quarter. Investment growth weakened considerably to just 4.7% y/y, compared to 9.1% y/y in April-June, data showed.

Growth in overall consumption decelerated to 4% y/y in the third quarter, 0.1pp below the second quarter reading. Household consumption expanded 3.9% y/y, marking a slowdown of 0.5pp compared to the annual expansion recorded in the previous quarter.

The headline figure confirms the flash estimate published in mid-November. But it is a slowdown of 0.7pp versus the unadjusted expansion in the second quarter.

Growth came in at 4.1% y/y in adjusted terms, an upward revision of 0.1pp against the flash estimate and the same result as in the previous three months.

“The data confirm the scenario of a gradual economic slowdown in Poland on a slightly stronger scale than we expected a few months ago. The structure of economic growth does not provide grounds for optimism. It is some consolation that the current economic growth [in Poland] still remains one of the fastest in the EU,” Bank Millennium said.

“The current drivers of the economy - the demand impulse generated by fiscal stimulation as well as public investments driven by the absorption of EU funds – are weakening. Private investment is also too lax to maintain solid growth,” it added.

Belarus GDP grew by 1.2% y/y in 2019
10 hours ago
Jump in Polish CPI confirmed at 3.4% y/y in December
1 day ago
Romania’s external debt rises on chronic wide CA gap
3 days ago
Ukraine consumer inflation ends 2019 at 4.1%
4 days ago
The number of unemployed Czechs reached its lowest level since 1996
7 days ago