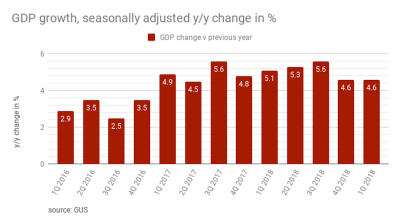 Polish GDP grew a seasonally adjusted 4.6% y/y in the first quarter, maintaining the expansion rate recorded in the fourth quarter of 2018, a flash estimate released by the Central Statistical Office GUS on May 15 showed.

The result is above the consensus that expected growth of 4.4% y/y and shows the Polish economy defying the slowdown abroad, especially in the Eurozone, Germany in particular. That said, sluggish Eurozone growth will take its toll on Poland eventually, analysts say.

The unadjusted y/y growth also came in at 4.6% y/y in January-March, a slowdown of 0.3pp against the unadjusted annual expansion recorded in the preceding quarter.

“The Polish economy proved to be resilient to the gloomier external environment and sustained solid growth,” Erste said in a comment on the figures.

“We believe that acceleration of industrial production to 6.2% in the first quarter, compared to 4.9% in the fourth quarter balanced somewhat weaker performance of retail sales that dropped from 7.5% in Q4 to 5.4% in the Q1. At the same time, trade balance has improved, what most likely contributed positively to the overall performance of the economy,” the Austrian bank added.

Consumption grew 3.9% yy in the first quarter, according to an estimate by Santander. If confirmed, that would mark a slowdown of 0.4pp against annual change in the previous quarter. Investment growth, in turn, slowed down to 7.2% yy in January-March, Santander claimed, a slowdown of 1pp.

Consumption is expected to prop up growth in 2019 making up for weaker investment, according to ING.

“We expect the 2019 growth rate to come in slightly above 4%. The fiscal programmes should also support the economy into 2020 and we're forecasting 3.3%YoY growth then, as household spending is likely only partially to offset weaker public investments,” ING said.

Erste predicts growth of 4.2% in 2019, a solid result. That said, “we expect that the economy will lose some of its momentum in quarters to come,” Erste forecast.

A detailed breakdown of the flash reading – together with a possible revision of the data – is scheduled for publication on May 30.

Retail sales crashed 17.9% y/y in April, a fall that was expected after the government instituted a lockdown to contain the spread of the coronavirus.

Russia’s April lockdown hit the statistics this week, after Rosstat reported that retail sales were down a massive 23.4% year on year and unemployment almost doubled in the month, the state statistics agency said on May 27.

In January-April 2020 Belarus industrial output declined 3.8% year on year as the double whammy of the oil price collapse and the coronavirus stop-shock hit home.

In January-April 2020 Belarus industrial output declined 3.8% year-on-year as the double whammy of the oil price collapse and the coronavirus stop-shock hit home.

COVID-19 lockdown results in collapse of Lithuanian retail sales in April
22 hours ago
Russian retail sales down by a quarter year on year in April, as unemployment soars
1 day ago
Ukraine’s real wage gains still positive but fall in dollar terms in March
1 day ago
Belarus industrial output declined 3.8% year on year in 4M20
3 days ago
Belarus industrial output declined 3.8% year-on-year in 4M20
3 days ago