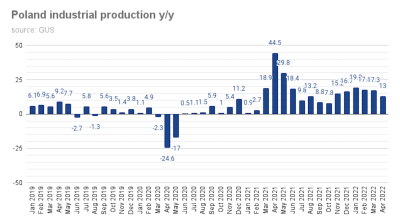 The expansion came 2.4pp below the consensus line, mainly on the back of output in the utility sector more than halving its growth rate. But weaker growth dynamics affected other sectors as well, analysts note, an early sign of an incoming economic slowdown.

“Data … confirm the weakening of the economic situation in the industry resulting mainly from supply disruptions and, to a lesser extent, from [weaker] demand,” Bank Millennium noted.

Broken down by the main segments and unadjusted terms, output eased growth to 29.5% y/y in the utility sector in April versus an expansion of 77.4% y/y the preceding month.

Overall, production increased in 30 out of 34 industrial segments in April in y/y terms, compared to 31 in March.

The April reading of industrial production remains supportive of full-year GDP growth of around 5% in 2022, with risks tilted to the downside now, analysts say. Poland’s economy grew 5.7% in 2021 after a pandemic-driven recession of 2.7% in 2020.

Slowdown in the industrial sector will not change anything in terms of Poland’s monetary policy, currently focused on containing two-digit inflation – 12.4% y/y in April with the peak expected at around 15% or even 20% in the coming months.

The National Bank of Poland has so far raised its reference interest rate eight times from 0.1% to 5.25% between October and May. That is expected to reach 6.5% in July, with more tightening likely later in the year.

Hungary’s jobless rate inches down to 3.5% in May
1 day ago
Polish retail sales growth eases to 8.2% y/y in May
2 days ago
Ruble rises to seven-year high, best performing currency in the world
3 days ago
Polish PPI inflation accelerates to 24.7% y/y in May
4 days ago
Bulgaria posts highest inflation in SEE amongst EU peers
4 days ago