Polish industrial production surprises on the upside with growth of 7.8% y/y in October 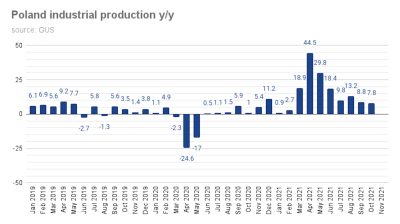 The expansion well beat the consensus, which expected a gain of 5.4% y/y only. The good result came on the back of very dynamic growth in the utility sector – generation of electricity, gas, steam, and hot water – which jumped 40.6% y/y in the tenth month, likely due to increased electricity exports, according to analysts.

“Excluding the electricity generation factor, the overall picture of the industry in October is broadly similar to that seen in recent months,” Bank Millennium said in a comment on GUS figures.

“Poland’s industry has handled supply chain difficulties better than other European countries due to relatively lower dependence on foreign suppliers and a lower share of industries most affected by this problem,” Bank Millennium also said.

Seasonally adjusted, industrial production grew 9.8% y/y in October after an expansion of 8.7% y/y in September. The monthly reading showed an unadjusted gain of 2.3% (+11% month-on-month in September) and also a gain of 2% upon adjustment (+0.9% in September).

Broken down by the main segments, output grew an unadjusted 5.5% y/y (+7.9% in September) in manufacturing. Production also expanded 10.7% y/y in water supply and waste management, easing 1pp versus the preceding month.

Overall, production increased in 25 out of 34 industrial segments in October in y/y terms, compared to 30 in September. Car production continued to suffer from a shortage of components, the output in the segment falling 19.5% y/y.

“Today’s data surprised to the upside and bodes well for the GDP growth in the fourth quarter,” Erste said.

“Nevertheless in the remainder of the year we might see some slowdown of industrial production growth, due to persisting supply-side issues as well as deteriorating pandemic situation,” the Austrian bank added.

The number of people sent into quarantine hit a new record high and stood last week at more then 500 thousand, which might force some enterprises to limit their operations due to lack of workforce.

Beyond 2021, the outlook for the sector is broadly favourable, with companies indicating they expect an increase in orders and production, according to Bank Millennium.

Poland suffered a pandemic-driven recession of 2.7% in 2020, one of the mildest contractions in Europe. The country’s GDP is projected to expand strongly at around 5% in 2021. The explosion in the number of new COVID-19 (coronavirus) cases remains a risk factor, however.

Russian inflation falls again to 14.9% in August, fears of a deflationary spiral grow
5 hours ago
FDI in Bosnia rose by 35% y/y in 2021
8 hours ago
Latvian unemployment rate at 6.6% in 2Q
1 day ago
Polish economy in much sharper downturn than expected, Q2 GDP data show
1 day ago
Russia’s EconMin seen as overly optimistic with another GDP upgrade
1 day ago