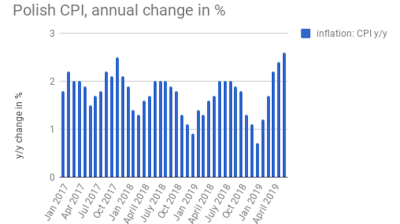 Polish CPI expanded 2.6% y/y in June, 0.2pp above the annual growth rate recorded the preceding month, the statistical office GUS said on July 15. The reading is in line with GUS' flash estimate, published earlier this month.

Inflation is expected to moderate in the second half of the year with the Polish Monetary Policy Council to remain dovish. Poland’s interest rates have remained unchanged at a record-low of 1.5% for over four years now.

The MPC’s head and the governor of the National Bank of Poland Adam Glapinski has hinted a number of times that interest rates might remain unchanged until the end of 2021 at least. The current macroeconomic context is perfect for Poland, Glapinski keeps saying.

“The strong rise in services prices in June reflects the impact of social transfers. Prices of package holidays added 0.09 percentage points to the headline. There were also increases in charges from telecommunication providers. The trend should continue in the autumn, as increases were announced by TV operators as well,” ING said.

Inflation is expected to ease in the coming months, as contributions from fuel prices and food prices will likely decrease. That said, ongoing drought in agriculture could ultimately result in prices of food growing faster than currently forecast.

Broken down by key segments, the annual CPI growth in June was driven by rising prices of the most-weighted segment of food and non-alcoholic drinks, where price growth accelerated to 5.7% y/y, compared to an already strong reading of 5% y/y in May.

Prices in other heavily weighted segments of housing and transport increased 1.7% y/y and 1.4% y/y, respectively. That compares to housing prices expanding 1.6% y/y in April as well while growing 1.7% y/y in the transport segment.