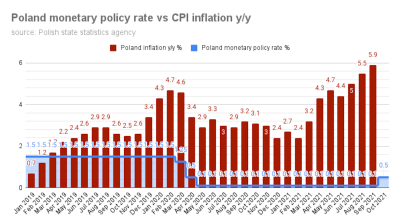 A 20-year high reading is once again an upward revision of 0.1pp of the flash estimate, which GUS published in early October. Even though the National Bank of Poland (NBP) surprisingly hiked interest rates from 0.1% to 0.5% this month, the accelerating price growth will likely enforce a longer tightening cycle. Analysts currently expect interest rates to climb to 1.5-2% during 2022.

The inflationary pressure is currently expected to keep increasing until a peak at 6.5%-7% y/y by February 2022, analysts say.

“The upward movement will owe to rising electricity and heating prices, further gas and fuel price increases, an increase in excise duty on alcohol and tobacco products coming in January, and rising food prices,” PKO BP said in a comment.

Food prices will increase not just because of higher prices of agricultural commodities – in particular gas, which drives up the cost of fertilisers – but also growing costs of processed food production.

“Inflation will start falling from March 2022 on to the local minimum just above 4.5% y/y in the third quarter of 2022. Core inflation will stay elevated due to a combination of rising labour costs, strong consumer demand as well as relatively weak zloty,” PKO BP said.

The price of fuel increased 28.6% y/y in September, adding 0.6pp versus August, the breakdown of the data showed. Transport prices – of which fuels are a part – grew 18.5% y/y, picking up 0.7pp versus August.

Food prices increased 4.4% y/y in the eighth month, compared to a growth of 3.9% y/y in August. Housing and energy prices added 7.2% y/y in September versus 6.9% y/y the preceding month.

Overall, goods prices went up 5.6% y/y in September after growing 5.1% y/y in August. Services price growth came in at 6.6% y/y, unchanged from the preceding month.

In monthly terms, CPI expanded 0.7% in September, with the growth rate picking up 0.3pp versus August.

Strain felt from headwinds including material shortages, lack of labour and price pressures.

For the first 10 months of the year, Geostat estimates an average growth rate of 10.5%.