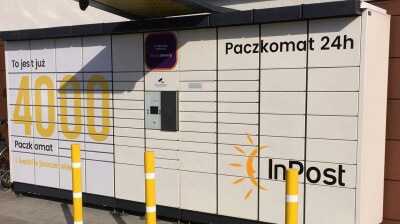 InPost’s parcel lockers – which can be operated via a phone app – are a common sight in Poland.
By Wojciech Kosc in Warsaw January 27, 2021

Shares in Polish parcel locker operator InPost jumped 19% on the company’s debut on Euronext Amsterdam on January 27, demonstrating investors’ interest in businesses that manage to thrive during the global pandemic.

InPost’s IPO in Amsterdam priced the company's shares at €16, valuing the company at €8bn, and the rise in the shares pushed the valuation up to €9.5bn.

InPost’s offering consisted of a €2.8bn private placement of existing shares to institutional investors, some of which – Black Rock, Capital World Investors, and GIC - went in early to buy just over €1bn worth of shares. The private placement represents 35% of the company's shares.

It also is a harbinger of good times for e-commerce and related services in the post-pandemic economy, which is expected to shift some consumer and work habits online for good. The interest in the offering proved so big that InPost decided to bring forward the subscription deadline and launch on Euronext Amsterdam on January 27 instead of the originally planned date in February.

E-commerce and logistic services have been in huge demand in Poland and across Europe since the COVID-19 (coronavirus) pandemic shifted much of consumer activity online, with purchase deliveries to parcel lockers like InPost’s.

Nearly a fifth of December turnover in the textiles, clothing and shoes category was from online shopping, Poland’s statistical office GUS said last week. That is still a drop from 35.4% in November.

InPost’s parcel lockers – which can be operated basically in a contactless way via a phone app – are a common sight in Poland. The company operated 12,254 of them at the end of last year.

The company’s share of the domestic B2C [business to consumer] delivery parcel volume in Poland more than doubled from 21% in 2017 to 43% last year. The company’s revenue doubled y/y to PLN1.67bn (€377mn) as of the third quarter.

In 2007-2017 InPost and its holding company, Integer, were listed on the Warsaw Stock Exchange, although its core business centred on actual postal deliveries in direct competition to the state-owned operator Poczta Polska.

The company lost a PLN3bn tender to become Poland’s designated postal operator, however, in 2015 and its WSE debut, while initially promising, quickly showed weak fundamentals of the company, which was then only beginning to roll out its parcel locker operations on a bigger scale. Eventually, Integer and InPost were delisted. Additionally, the company received much bad coverage in the media after it sold a subsidiary, which owed employees wages, to an external entity, which not only never paid arrears to people but laid them off.

The company’s founder, Rafal Brzoska, owns 13% of InPost, although only 1% directly, with the rest held by a Malta-registered company A&R, which in turn is majority-owned by a Liechtenstein-based foundation controlled by Brzoska.