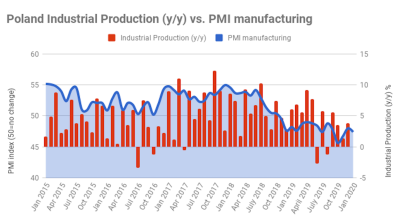 Poland’s PMI declined 0.6 points to 47.4 in January, the lowest start to the year since 2009, IHS Markit reported on February 3. The indicator has now remained below the 50-point line separating contraction from growth for 15 straight months, the longest such series since 2012-2013.

The weak data marks the continuation of the downturn in Poland’s manufacturing segment, despite some improvement in sentiment in European industry. That is in line with forecasts of the Polish economy going into a deeper slowdown in 2020 after growth eased to 4% in 2019 from 5.1% the previous year.

January data showed “sustained declines in output, new orders, purchasing and employment. Notably, the sector's workforce was cut at the fastest rate since October 2009,” IHS Markit said in a comment.

“The downturn in exports gathered pace having slowed at the end of 2019. Sentiment regarding the 12-month outlook continued to recover from last November's record low, but remained subdued overall,” the index’s compiler added.

Industrial production accelerated from 1.4% y/y to 3.8% y/y in unadjusted terms but that also fell below market expectations.

Romania’s inflation up in April on higher fuel and electricity prices
15 hours ago
Romania’s net wage hits record €726 in March
15 hours ago
Slovenia reports hike in demand for new workers in manufacturing and retail sectors
1 day ago
Inflation in Belarus at 4.6% in April
1 day ago
Polish gross wages pick up growth to 6.6% y/y in Q1
1 day ago