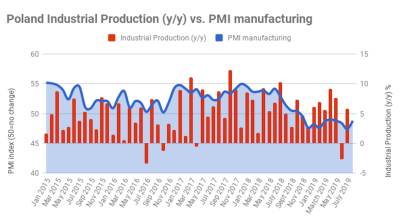 Poland’s PMI grew 1.4 points to 48.8 in August, remaining below the 50-point line separating contraction from growth for the tenth month in succession, IHS Markit reported on September 2.

The indicator’s growth attests to the easing of the overall pace at which business conditions deteriorated in August. “[The easing was] reflected in slower declines in output, new orders and employment. That said, backlogs continued to drop sharply and firms remained the least confident regarding the 12-month outlook for several years,” according to IHS Markit.

Of the five components of the index, output, new orders and employment contributed to the month-on-month increase in the main figure, while suppliers' delivery times and stocks of purchases were neutral, IHS Markit said.

The volume of new orders received by Polish manufacturers fell for the tenth successive month in August but the rate of contraction eased to the slowest since May. New export business declined at the weakest pace in nine months, albeit one that remained stronger than that for total new work.

Production fell for the tenth successive month in August but the rate of decline eased to a marginal pace. Output fell by less than new business, suggesting that the clearance of backlogs had supported overall production levels.

Lower backlogs hinted at ongoing spare capacity in the goods-producing sector, to which firms adapted by further reducing their workforces. Manufacturing employment fell for the ninth time in the past 11 months, albeit slightly.

Purchasing fell for the ninth consecutive month, and suppliers' delivery times remained unchanged. Meanwhile, inventories of both inputs and finished goods declined during the month, the first concurrent reduction since February 2018.

Cost pressures remained relatively weak in August, with average input prices rising at the third-slowest rate in around three years. Prices charged for manufactured goods increased at the fastest rate since March.

The apparent weakness of the Polish industrial sector in August is yet to be confirmed by industrial production data, due later this month. In previous months, there have been mostly mismatches between individual readings of the PMI and the actual performance of the industrial sector.

Overall, however, the consensus for the Polish economy forecasts an incremental deceleration of economic growth in Poland in the coming quarters.