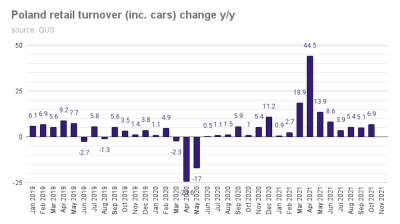 Polish retail sales grew 6.9% y/y in constant prices in October, the growth rate picking up from an expansion of 5.1% y/y the preceding month, statistics office GUS said on November 23.

The October reading is clearly above the consensus, which expected a gain of 6.3% y/y. That is a surprise, given the context of accelerating inflation, which will increase its negative impact on consumption in 2022.

For now, however, retail sales and other high-frequency data such as industrial production provide a good start to the fourth quarter in Polish economy.

“The latest data suggest that Poland’s economy started Q4 with solid momentum as industry and retail sales expanded strongly in October. We think that industry will continue to hold up well in the coming months, but headwinds from surging inflation and rising virus cases are likely to take a toll before long.

“Our 5.3% GDP growth forecast for the entire year remains realistic,” Bank Millennium said in a comment on GUS figures.

Seven out of eight main retail segments posted y/y turnover gains at constant prices in October, GUS showed in the breakdown of the data.

Sales of pharmaceuticals grew 6.1% on the year. Sales of furniture, audio and video equipment, and domestic appliances grew just 0.2% y/y due to problems in supply chains.

The only retail segment to have suffered a turnover decline was cars, where sales deepened fall to 5.2% y/y, once again owing to supply problems linked to the worldwide shortage of chips and other components.

In monthly terms, retail sales grew 3.6% in constant prices in October after falling 2.4% month-on-month in September.