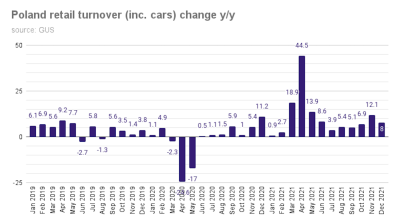 The December reading landed clearly below market expectations for an expansion of 9.4% y/y. In m/m terms, sales grew an unadjusted 14.9% but declined a seasonally-adjusted 3.4%.

December figures may point to the high inflation beginning to subdue consumption or to households holding back spending after increased spending in November, Bank Millennium notes. Poland's central bank NBP is expected to deliver the fifth interest rate hike in as many months in early February to contain price growth in what many think is a much belated reaction.

Poland’s CPI surged 8.6% y/y in December and is expected to near the 10% mark in January. On the other hand, Polish households’ income situation remains very good, as wages grow amidst labour shortages. The unemployment rate in Poland was just 5.4% in December.

Seven out of eight main retail segments posted y/y turnover gains at constant prices in December, GUS showed in the breakdown of the data.

Sales of pharmaceuticals grew 18.8% on the year. Sales of furniture, audio and video equipment, and domestic appliances grew 1.5% y/y.

The only retail segment to have suffered a turnover decline was cars. Sales in the segment declined 8.5% y/y.

Retail sales and other high-frequency data published for December point to a strong economic growth in the fourth quarter, analysts say.

“We think that GDP expanded by around 6.8% y/y in Q4 which would leave Poland as the best performing economy in the region, but that the recovery will slow a touch at the start of this year,” Capital Economics said without presenting a full-year forecast.

An upbeat data release by the Russian statistics agency Rosstat, suggests that Russia’s economy is doing better than expected. Capital Economics has revised its estimates for the GDP contraction in the first quarter down from -15% to -10%.

Russian economy stable in May, but demand and income contraction deep
17 hours ago
CEE Economic Sentiment Indicators fall on polycrisis woes
20 hours ago
Europe’s gas storage on track to meet 80% full by start of heating season
1 day ago
Kosovo’s population dropped to 1.77mn in 2021 as emigration outweighed natural increase
2 days ago
North Macedonia’s PPI jumps 21.7% y/y in May
2 days ago