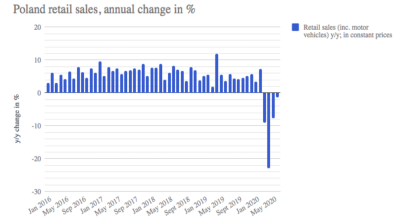 A reduction in shops’ turnover had been expected but at 2.5% y/y and it appears that the positive effect of accumulated demand played a role in reducing the fall rate clearly above the consensus. Sales declined 7.7% y/y in May.

“In the coming months, we expect retail sales growth to recover further and enter positive territory. Fairly good data for June in both manufacturing and retail sector suggest that double-digit contraction in the second quarter became less likely in our view,” Erste said in a comment.

“Our now-casting model … points to “just” 2.2% y/y contraction in 2Q20. However, given the extraordinary circumstances we believe that the drop will be likely … around 5% y/y due to the strong hit to services sector that is not directly included in the model,” the Austrian bank added.

Erste and most other banks now predict that the Polish GDP will contract by around 4% in 2020, the mildest recession in the EU.

Most retail segments saw sales fall in annual terms in constant prices in June, GUS data showed. The declines were much milder than in May.

In monthly terms, retail sales increased 8.4% in constant prices in June after jumping 14.9% in May – which was off the lockdown-induced low base in April. Seasonally adjusted, retail sales grew 8.1% m/m in June.

In current prices, retail sales slid 1.9% y/y in June versus a decline of 8.6% y/y the preceding month. In monthly terms in current prices, turnover grew 9%. That followed an expansion of 14.5% m/m in March.