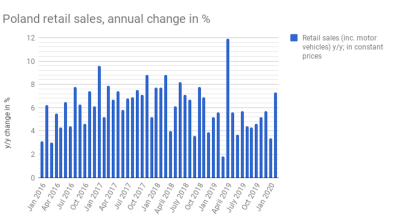 February thus marked a gain of 3.9pp in retail turnover growth in comparison to the y/y expansion recorded in January. That will be the last positive reading from the retail sector, as March figures will tank as an effect of the lockdown imposed in Poland to tackle the coronavirus outbreak.

All retail segments expanded y/y sales in constant prices in February, GUS data showed. Turnover in the textiles, clothing, and shoes segment grew the fastest, at 13% y/y, followed by an expansion of 9.2% y/y in sales of domestic appliances, furniture, and audio-video equipment.

In monthly terms, retail sales expanded 0.4% in constant prices in February - a normal occurrence after the Christmas season - after falling 20.5% m/m in January.

In current prices, retail sales grew 9.6% y/y in February versus an expansion of 5.7% y/y the preceding month.

In monthly terms in current prices, turnover grew of 0.5% that followed a gain of 20.4% m/m in the first month.