Polish retail sales surprise with growth of 9.6% y/y in March 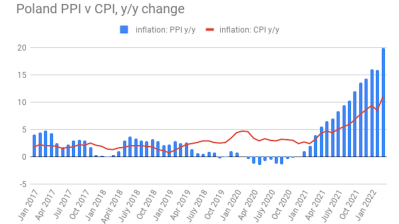 Polish retail sales grew 9.6% y/y at constant prices in March, the growth rate picking up versus a gain of 8.1% y/y the preceding month, the statistics office GUS said on April 22.

The March reading shows the effect of the influx of more than 2mn war refugees from war-torn Ukraine but also Poles’ resilient consumption in spite of rampant inflation, which ticked up at 11% y/y in March.

Retail data rounded up a very good first quarter in the Polish economy with the outlook for Q2 and later quarters remaining broadly favourable due to the strong labour market and the refugees boosting the number of consumers, analysts say.

“However, due to the expected high inflation, rising interest rates and a less favourable base effect, the annual growth in consumer demand should decline. In our opinion, consumption in 2022 will increase by 4.2% after an increase of 6.2% last year,” Bank Millennium said.

Overall, notes the state-controlled bank PKO BP, “economic growth in Q1 could have even reached 10% y/y, which … is a significant upside risk to our full-year GDP growth forecast of 3.3%”.

“A lot of this strength is unlikely to last as the effects of the war in Ukraine bite, but Poland is likely to avoid a contraction and continue outperforming its regional peers this year,” Capital Economics said.

Six out of eight main retail segments posted y/y turnover gains at constant prices in March, GUS showed in the breakdown of the data.

Food sales inched up 0.2% y/y. Sales of furniture, audio and video equipment, and domestic appliances added 2.8% on the year. Car and car parts sales declined 9.3% y/y. The lump category of “other” recorded a gain of 31.2% y/y.

In m/m terms and at constant prices, sales added an unadjusted 16.4% and grew 1.4% following adjustment in March, GUS data also showed. At current prices, there was an unadjusted gain of 22% m/m.

Retail sales and other data do not change much in the outlook for interest rates in Poland. The National Bank of Poland is all but certain to deliver yet another hike in May with the market expecting an increase of 50bp to bring the reference rate to 5%.

More tightening is still very much certain in the coming months, as inflation is expected to persist in double digits in the wake of the war in Ukraine and the resulting high prices of energy commodities.