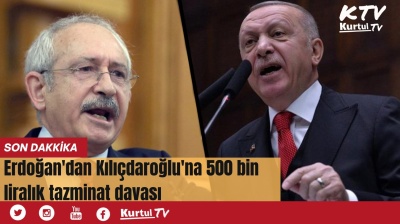 Erdogan, right, is for ever suing leader of the CHP opposition party Kemal Kilicdaroglu, left. This latest row is set to produce a lawsuit from the president's son-in-law and former finance minister Berat Albayrak.
By bne IntelIiNews February 22, 2021

A political row has blown up in Turkey over a social media campaign by the main opposition party that demands to know what has happened to $128bn of foreign exchange reserves that were held by the central bank.

The answer? The Erdogan administration in 2019 began an unorthodox FX interventions policy to defend the Turkish lira (TRY) in the wake of Turkey’s August 2018 currency crisis. But the policy, while burning up the reserves at an horrendous rate, failed, taking the country to the brink of another currency crisis last autumn, causing President Recep Tayyip Erdogan to replace his finance minister—his son-in-law Berat Albayrak—and central bank governor and switch to more orthodox economic strategies.

Not that that is the answer that the party behind the social media offensive, the Republican People’s Party (CHP), got from the president when it blamed Albayrak for what it presented as a fiasco. Erdogan, claiming the use of the reserves helped Turkey to ride out a tough period caused by coronavirus crisis shocks, said the campaign was an attack on him and his family.

Albayrak, he said, had stood at the forefront of the country’s economic battle, adding: “Planned forex transactions were carried out in this difficult period to ensure there were no problems with the balance of payments. Thanks to the forex transactions, our country managed to remain committed to its goals despite serious international shocks.”

Since Albayrak stepped down, the lira has rallied more than 20%, but February 22 saw it weaken by around 1.0% to slight over seven to the dollar.

Prior to Erdogan’s comments, finance minister Lutfi Elvan defended Albayrak’s reserves policy as a response to the extraordinary demands of the COVID-19 pandemic. “I strongly condemn the unjust and rude rhetoric used by the CHP,” Elvan said on Twitter.
A lawyer for Albayrak said at the weekend that the CHP’s campaign comprised “ugly slander and attempts at smearing” the former minister. He added that they would file a TRY500,000 ($71,000) damages lawsuit over the campaign.

Turkey’s precarious economic position was on February 19 underlined by Mustafa Sonmez, an economist and writer, who, in an article for Al-Monitor, said Turkey’s foreign debt repayments and the financing of its current account deficit would require at least $200bn this year, threatening to push up borrowing costs and disrupt the recent gains of the battered lira unless Ankara rebuilt its credibility among financiers and investors.

The amount of Turkish external debt due to mature over 12 months stood at some $189bn at the end of 2020, equivalent to 43.4% of the country’s $435bn external debt stock, according to central bank data released February 18. The foreign debt stock, meanwhile, has come to account for nearly 60% of Turkey’s GDP under the impact of the economic downturn since 2018, fuelled by the severe depreciation of the Turkish lira, Sonmez pointed out.

The rollover of foreign debt has already strained Turkey in recent years, forcing it to borrow on higher interest rates, while Turkey needs foreign monies also to finance its current account deficit, which is likely to hit $15bn this year, he said.

The economic blows of the pandemic led to a deficit of nearly $37bn last year, according to central bank figures. Though the growth rate for 2020 has yet to be officially released, estimates put it at 2%, said Sonmez, observing that that is “a rate that makes the current account gap even more staggering”.

Turkey needs a vibrant flow of foreign investments, he said, but “the most exciting investment plan last year—a big plant by German carmaker Volkswagen—went down the drain amid political tensions between Ankara and the European Union”, foreign interest in the country’s industrial and services sectors is “next to zero” and a much lower risk premium—below 200 bp at least—was “the key to an easier and cheaper access to foreign funds.”

Sonmez concluded: “Ankara can achieve this only through economic and political steps to boost its credibility in the eyes of domestic and foreign actors. Investors need confidence that Ankara has a stable economic plan that goes beyond monetary tightening through rate hikes. They expect also transparency in key economic areas, including clarity on the amount of bad loans in the banking sector and the financial burden brought on the budget by controversial turnover guarantees Ankara has offered to companies involved in major infrastructure projects.

“Last but not least, they are watching closely whether Ankara follows through with pledges of judicial reform to restore trust in the rule of law”.

The Turkish treasury had to accept an interest rate of around 5% to be able to borrow in January, when the country’s risk premium stood at about 300 bp.
Read in IntelliNews Pro
Get IntelliNews Pro