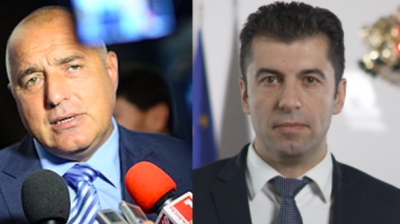 Former prime minister Boyko Borissov’s populist Gerb is slightly ahead of Kiril Petkov's reformist Change Continues, but neither would be able to put together a firm majority. / bne IntelliNews
By Denitsa Koseva in Sofia September 1, 2022

Bulgaria’s former ruling Gerb party led by Boyko Borissov is leading the polls ahead of the October 2 snap general election. Gerb is ahead of reformist Change Continues, led by former prime minister Kiril Petkov and former finance minister Assen Vassilev, a poll carried out by Trend showed on September 1.

Bulgaria will hold a general election after Petkov’s government lost its majority in parliament and fell in June. His party hopes to gain enough support along with reformist Democratic Bulgaria for a more stable majority in next parliament.

However, Trend’s poll showed that, should the vote be held now, Gerb would get 24.4% of the vote, followed by Change Continues with 19.6%. Another poll, carried out by Market Links, showed similar results – 22.4% for Gerb and 19.1% for Change Continues.

Trend’s poll also showed that the ethnic-Turk Movement for Rights and Freedoms (DPS) would come third, followed by far-right Vazrazhdane (10.3), the Bulgarian Socialist Party (8.6%) and Democratic Bulgaria with 7.3%.

Gerb has already indicated it would be willing to rule in coalition with the DPS. Analysts also suggest that the party could add Vazrazhdane to its coalition partners. However, that would not be enough for a stable majority.

Analysts suggest that the votes of Bulgarians living abroad could be decisive for the election outcome, but many are sceptical that the next parliament would be able to produce a ruling majority and a regular government.

Despite that, 61% of Bulgarians want a regular government and only 19% said that a new vote would be better than political parties making too many compromises to form a majority.

Meanwhile, Bulgarians are deeply divided in their assessment of the actions of the rather pro-Russian caretaker government led by Prime Minister Gulub Donev, with one third approving of it, one third disapproving of it and the remainder unable to decide.