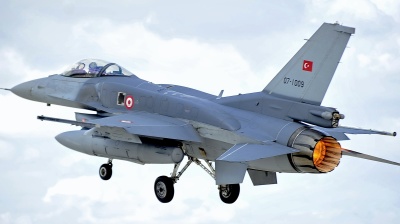 A Turkish Air Force F-16 Fighting Falcon seen during a Nato exercise in Turkey in 2014.
By bne IntelliNews November 26, 2019

Reports that Turkish Air Force F-16 warplanes were early this week flown over Ankara to provide target practice for S-400 missile defence systems that were acquired from Russia against the express wishes of the US and Nato were “concerning” US Secretary of State Mike Pompeo said at a press conference in Washington on November 26.

Pompeo reiterated that the US has made it clear to fellow Nato member Turkey that Washington wants to see Ankara move away from full operation of the S-400s, which Nato officials say are a particular problem as they pose a security threat to the performance data of the F-35 stealth fighter jet which is being introduced across the military bloc.

However, despite the reports of the radar testing involving the American-designed F-16s, Pompeo stressed that talks between the US and Turkey over the S-400 matter were still under way, adding: “We are hopeful. We are still talking to the Turks, still trying to figure out our way through this thing.”

Turkey claims it purchased the S-400s because the US would not give it a good deal on alternative Patriot missile systems that would include sufficient transfer of technology knowhow.

As things stand, Turkey has been told by the US that it will not be receiving F-35s it has ordered from the US, while it has been kicked out the manufacturing and development programme for the Lockheed Martin aircraft.

There are bipartisan attempts taking place in Congress to sanction Turkey over the S-400 acquisition and deployment as well as its incursion into northeastern Syria, but there is no guarantee US President Donald Trump, who makes a point of saying he has very friendly relations with populist Turkish counterpart Recep Tayyip Erdogan, would not veto any such measures that come before him.

Referring to the talks Pompeo mentioned, Erdogan told Turkish broadcaster NTV on November 26 that “we need to see where we get with these efforts”. The talks would continue until April, he added.

Meanwhile, November 26 also saw reports emerge in Russia that the Kremlin hopes to seal a deal to supply Turkey with more S-400 missile systems in the first half of next year. The head of Russian state arms exporter Rosoboronexport, Alexander Mikheev, was cited by RIA news agency as saying that Moscow and Ankara were actively discussing Ankara taking up a contractual option for Turkey to receive more S-400 systems, with talks presently focused on financial questions.

“We hope that in the first half of 2020 we will sign the contract documents,” RIA quoted Mikheev as saying. “But I want to stress that military technical cooperation with Turkey is not limited to the supply of the S-400s. We have big plans ahead.”

US attempts to stop other countries buying Russian military hardware had not been as effective as Washington hoped, Mikheev was also cited as saying, adding: “You can see how confident India, China, Turkey and other countries are on the international stage. Many are openly outraged by US sanctions policy, which is trying to prevent them from developing their own armed forces and technical military cooperation with Russia.”

Erdogan—who has this week informed members of his AKP party that Turkey’s long-planned, locally made jet fighter should be ready for flight in five to six years, even though Ankara officials have previously aimed to hold the first flight by 2023—is set to attend a summit of Nato heads of state and government in London on December 3-4.

Also making news on November 26 was a Reuters report citing four senior Nato sources as saying Turkey is refusing to back a Nato defence plan for the Baltics and Poland until the alliance offers Ankara more political support for its fight against Kurdish YPG militia in northern Syria.

Ankara has told its Nato envoy not to sign off on the plan and is taking a tough line in meetings and in private conversations, demanding the alliance recognise the YPG as terrorists in the formal wording, the sources reportedly said.

Nato envoys want formal approval from all 29 member states for the military plan to defend –in the event of a Russian attack.

“They [the Turks] are taking eastern Europeans hostage, blocking approval of this military planning until they get concessions,” one diplomatic source reportedly remarked.

Honcharuk quit his post on January 16 a few days after being caught on tape saying Zelenskiy knows nothing about the economy.

V4 plus Austria agree on issues such as migration, border security and enlargement, but differences arise over nuclear energy as a solution to climate crisis.

For MET, an integrated European energy company with roots in Hungary, the partnership with Keppel is the next step to exploring joint energy infrastructure investment projects in Europe.

German defence minister acknowledges US threatened it would impose 25% car tariff if EU’s big three did not formally accuse Tehran of breaching nuclear deal. But Europeans claim they were going to do so anyway.