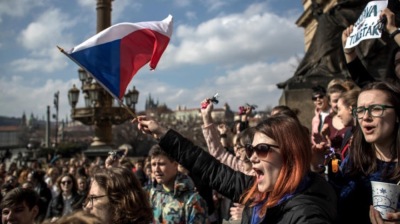 More than 100,000 people gathered on Wenceslas Square in the heart of Prague to demand the resignation of Prime Minister Andrej Babis
By nto in Prague June 6, 2019

Wenceslas Square in the heart of Prague, a symbol of the fall of communism in 1989, hosted the biggest protests in the history of independent Czech Republic on June 4, as crowds demanded the resignation of Prime Minister Andrej Babis (ANO).

The organizers plan to keep the momentum up and fill Letna Plain, another venue for mass rallies during the Velvet Revolution that ended communism, with 200,000 protesters from all part of the country on June 23.

“We appeal to all deputies and senators to commit themselves to support at least the first point of the Commitment at www.nezavislajustice.cz until June 11 and to put pressure on approval of a narrowly focused parliamentary draft amendment that will strengthen the independence of the Public Prosecutor. This safety measure must be accepted as quickly as possible so that it is no longer possible to remove the Public Prosecutor at any time! We want actions, not just words!” the initiative Million Moments for Democracy call upon the public officials.

When asked by daily Novinky.cz whether he was watching the protests against him and the Minister of Justice Marie Benesova, Babis replied he did not. “Why would I watch it? It is a nice weather outside. They go to the concerts there,” he said, adding that, “Today we were sitting with the minister Benesova and with the Rekonstrukce statu [Reconstruction of the State, Czech NGO]. There is no reason to protest. It's not pleasant, but I accept it. What can I do. They demonstrate on the basis of false facts. But I won´t convince those people.”

In response to the PM´s statement, the Rekonstrukce statu immediately called upon to him to stop using them as a fig leaf and accept the necessary safety measures for independence of judiciary.

“Andrej Babis should not use Rekonstrukce statu and me in this situation as a fig leaf. Yesterday's meeting was not going well at all. The Prime Minister has rejected our demands, claiming that the justice system is not threatened and there is no need for any fast actions. If he then says in the media that he holds talks with us and thus there is no reason for demonstrations, he should immediately implement all the safety measures for independence of the judiciary and then consider changing the Minister of Justice for a person who commands more public confidence,” said Director of Frank Bold and founder of Rekonstrukce statu Pavel Franc on June 5.

“I definitely didn't go to a concert, as Andrej Babis said, I went to support civil society and protest against the current political situation in the country,” Jiri Mach from the Czech Council on Foreign Relations told bne IntelliNews, adding that he does not agree with the government of Babis and his attacks on the very essence of the rule of law.

“I went there because I wanted to demonstrate my personal opinion on current state of the work of the Czech Government on which head is a man who would, in any other civilized country, have already resigned,” up-and-coming politician Matej Benda (Social Democrats) told bne IntelliNews.

“I hope more people who care what is going on in this country will join us. Of course, there is an issue with insufficient opposition forces, but we as the civil society want fair competition among political entities and justice,” Mach added.

According to Benda, the protesters might not achieve much immediately, as the government controlled by a majority of Czech MPs aligned with Babis. However, civil society is attempting to awaken the still dormant Czech citizens and make them realize “enough is enough,” Benda said. The longer term goal, in case the protestors cannot force Babis to resign, is to ensure he loses the next elections and to end his political career, says Benda.

The latest protests were sparked by a leaked copy of the European Commission’s (EC) audit report that found the Czech PM has a conflict of interest, despite the fact that his former businesses have been placed in trust funds. While the EU report has not been submitted yet, it used damning language and suggests that the EU will demand the returned for all its funds used by the companies belonging to Babis.

And the EU audit report is not the only one that disparages Babis. According to the Czech News Agency (CNA), a second audit report related to agricultural subsidies for Babis’s Agrofert just arrived at the Permanent Representation of the Czech Republic to the EU. The Ministry of Agriculture will comment on the second report on June 6.

CNA said that it is possible that Agrofert will have to return all investment agricultural subsidies it has received since February 2017, but that will not affect the so-called direct payments that are paid to all farmers in the EU.

Hospodarske Noviny said the second audit report again criticizes Babis for a conflict of interest, but does not state how much money the Czech Republic should return to Brussels. As daily Dennikn.cz reported, the second audit includes, next to Babis´, also the name of the Minister of Agriculture Miroslav Toman (Social Democrats).

Mongolia to go ahead with Naadam festival, but with no tourists

The coronavirus (COVID-19) pandemic has played hell with the international event calendar everywhere this year. But not in Mongolia, which has decided to go ahead with Naadam, Mongolia’s biggest festival.

Mongolia to go ahead with Naadam festival, but with no tourists
2 days ago
Protests pose unprecedented threat to Turkmenistan’s authoritarian government
2 days ago
Profits of Ukraine’s banks still ahead of last year, but first signs of crisis impact visible
3 days ago
Suma Chakrabati leaves the EBRD a greener bank
6 days ago
Udokan: Alisher Usmanov’s Siberian copper valley
9 days ago