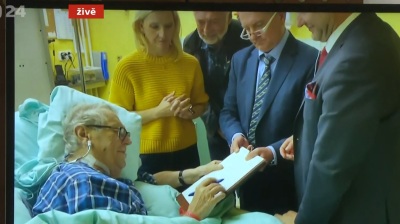 Czech President Milos Zeman has unexpectedly agreed to appoint all the ministers of the incoming government as initially proposed by Prime Minister Petr Fiala, including the candidate for Foreign Minister, Jan Lipavsky, whom he had earlier refused to name.

After "very open and tough at times" discussions with the president on December 13, Fiala said Zeman's reservations against Lipavsky persist. However, he did not want to delay the appointment of the new government.

"But in the interests of the Czech Republic, we have agreed that the government will be appointed as a whole according to my proposal," said the ODS leader.

The populist president had criticised Lipavsky for only having an undergraduate degree and for allegedly having views on Israel that were at variance with the rest of the government. The president wants Czechia to move its embassy in Israel to Jerusalem, a position that no other EU country has taken because of Israel’s continued occupation of Palestinian East Jerusalem.

Lipavsky, a member of the liberal Pirate party, has spoken out against such a move; he also has called for a tougher stance against Moscow and Beijing, whereas Zeman has always tried to build bridges to them.

The new centre-right government – composed of the coalition SPOLU (Civic Democrats, Christian Democrats, TOP09) and the coalition of STAN and the Pirates –  is to be appointed on Friday, December 17. The Chamber of Deputies will be asked to give a vote of confidence in the new government in mid-January.

Analysts have mostly commended Fiala on winning his first battle of wills with Zeman. The incoming premier had threatened to refer the issue of whether the president could block ministerial appointments like this to the Constitutional Court, where legal experts predicted he would win.

However, this would have delayed the appointment of the government for another month, unless the premier or another minister had temporarily taken over the foreign minister’s portfolio.

Fiala had tweeted last month: “I don’t think we have 100 days to play with. I think that we have never been in such a difficult situation in the existence of an independent Czech Republic: COVID, energy prices, inflation. These are problems that we must address immediately.”

If, on the other hand, Fiala had agreed to nominate a different minister, this would have confirmed Zeman’s leading role in foreign affairs, crippled Fiala’s authority, and could have led to severe problems inside the Pirates.

"This is a great success of the incoming Prime Minister Petr Fiala… It is good that we have stood our ground and we need to appreciate the sensible approach of all actors. We will now be able to start working for our citizens," said chairman of the STAN movement Vít Rakušan, leader of the second-strongest party in the new government, and the Pirate’s electoral partner.

The right-wing leader may have won the first battle with Zeman but there are likely to be many more before the president steps down in spring 2023.

Some observers have criticised Fiala for being too conciliatory and for allowing Zeman to drag out the government formation process for two months from the general election on October 8-9. They would have preferred him to challenge the president at the constitutional court to clarify the issue of his competences because Zeman has used loopholes in the Consitutution to expand his authority.

Former minister of justice and lawyer Jan Kalvoda told Seznam Zpravy before Zeman’s climbdown: “The coalition has been manoeuvered into a field in which the president is a master – because he has no values ​​and he is ruthless.”

“It seems to me that the fact that the coalition let Zeman operate in this way is its first political defeat. Such a discussion should not have taken place at all,” Kalvoda added.

However, Fiala told Czech media that it would serve no purpose for the constitutional institutions to go to war. "I will do everything in our power to have a dialogue together, to reach solutions that benefit the Czech Republic and its citizens," he said.

“The president does realise the situation in which Czech citizens are and therefore he decided for this statesmanlike step of appointing the government as I proposed it, which I truly appreciate,” Fiala said.