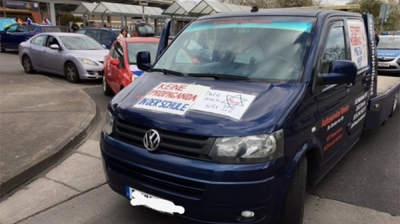 Van leading Russian pro-war demonstration in Berlin, bearing signs in German saying: "No propaganda at school" and "Soon us too?", with Star of David. / Friedenswatch
By Dominic Culverwell in Berlin April 5, 2022

Germany’s Russian community organised a mass motorcade in Berlin on April 3 in support of Russia’s invasion of Ukraine, shocking residents in the capital, which is admitting thousands of Ukrainian refugees a day.

Although the motorcade took place under the guise of being an anti-Russophobia protest, many accused the group of being pro-war, pointing toward the display of Russian military flags as well as the “Z” symbol which has become synonymous with the invasion.

Around 900 people in 400 cars drove through the city, from East to West, carrying banners that read “No propaganda in schools”, “Stop hatred against Russians”, and photos of Russian President Vladimir Putin.

Russian "fake-news" laws prohibit criticism of the Russian army or any reference to the invasion as a "war". Instead, it must be referred to as a "special military operation".

Moreover, the head of the demonstration placed the Star of David with the inscription “Soon we too?” on his car. The police reportedly intervened, removing the star and questioning individuals displaying the “Z”. No arrests were reported and the motorcade was legally organised with a police presence. 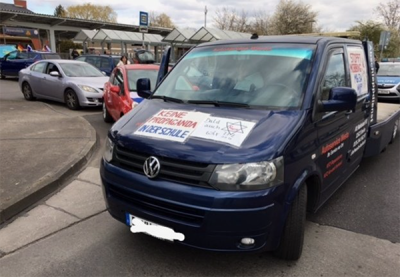 Shockingly, the route went past Berlin’s main railway station, where thousands of Ukrainian refugees arrive in Berlin on a daily basis.

Furthermore, weekly protests against the war organised by the Ukrainian community take place every Sunday. One Ukrainian protester shared a story on social media about how a Russian driver threatened to rape her after she shouted: “Glory to Ukraine”. 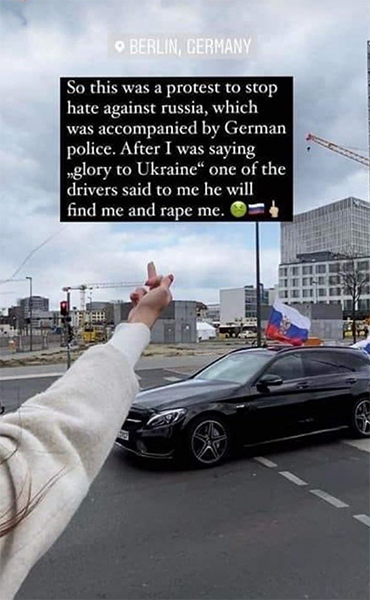 The pro-Russian demonstration received huge criticism online, with many furious at how the state of Berlin allowed it to take place.

The Ukrainian ambassador to Germany, Andrij Melnyk, condemned Berlin’s mayor on Twitter: “Dear Governing Mayoress Franziska Giffey. For heaven's sake, how could YOU allow this car parade of shame in the middle of Berlin? And on the day that the massacres of civilians in Butscha came to light? HOW???”

Other Twitter users called for participants to be deported, accusing them of being a threat to national security.

The drivers also stopped at the Soviet War Memorial in Treptower Park, where they reportedly placed flowers and waved USSR flags.

There are concerns that a larger or potentially violent demonstration will take place on May 9, when Russians celebrate “Victory Day” over Nazi Germany. Thousands of Russians in Germany participate every year.

“This is a foretaste of what will await us on 9 May. We must not tolerate warmongering fascist propaganda here in Berlin – neither today nor at any other time,” tweeted Green party member Gollaleh Ahmadi.

Russian President Vladimir Putin stated last month that Russia’s war in Ukraine will end on May 9. However, this has been dismissed as Kremlin propaganda to emphasise Russia’s accusation that Ukraine is run by Nazis.