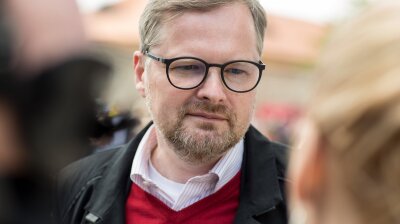 Petr Fiala has emphasised decency, which he believes is not a weakness, and has avoided conflicts whenever possible.
By Robert Anderson in Prague December 16, 2021

Petr Fiala, who takes over as Czech premier on Friday, has defied sceptics not just by winning the October general elections but also by besting the country’s domineering president, Milos Zeman, in a tussle this month over his coalition’s choice of foreign minister.

Until quite recently Fiala, 57, was written off as a patsy, someone who had taken over the leadership of the right-wing Civic Democrats (ODS) in 2013 when it was at its lowest ebb and no-one else wanted the job.

Prime Minister Petr Necas, like the party’s two previous premiers, had been forced to resign amid a swirl of corruption scandals, and at the subsequent election in 2014 the party lost two thirds of its seats and fell to fifth place.

Fiala, formerly rector of his home town Brno’s Masaryk University, had become an aide to Necas in 2011, then briefly education minister and after the election an MP, but he did not even join the ODS party until November 2013.

Nevertheless, just two months later in January 2014 he was put forward and elected leader by some of the party’s big beasts – including former and future justice minister Pavel Blazak – because he was seen as a clean pair of hands, and someone who had not been embroiled in the internecine warfare that had brought down Necas.

Over the next seven years the former politics professor cut a rather forlorn figure in Parliament as the ODS languished in opposition. He was regularly written off as just a smartly dressed figurehead, while real power remained in the hands of the party’s powerful regional governors. Though very conservative on issues such as gender politics, accepting refugees and combating climate change, he appeared positively moderate compared to many of his party's loudest voices.

His intellectual, dry and rather pompous style of debating did not resonate with ordinary voters, who were used to the more populist, combative style of Zeman and his ally, the billionaire turned politician, Prime Minister Andrej Babis.

Fiala is also unusual in the country’s amoral political world and more widely in its liberal society for being a committed Catholic. His religion affects his political approach, be it in his views on same-sex marriage or his closeness to the ruling radical right-wing Polish Law and Justice party, which leads the ODS’ European parliamentary group.

Fiala’s reputation only began to change when he made the crucial decision to form the pre-election SPOLU (Together) coalition with the two smaller centre-right parties, the Christian Democrats and TOP09, in October 2020, a year before the scheduled general election.

This wrapped the still rather tarnished ODS brand in new packaging, immediately gave SPOLU the weight of a real alternative to Babis’ dominant personal vehicle, the ANO party, and positioned Fiala himself as a potential premier.

Fiala’s SPOLU then reached an agreement with the other more centrist opposition coalition of the Pirate party and the Mayors and Independents (STAN) party, in which they pledged to form a government together if they won the election.

For most of this year, SPOLU trailed in third place in opinion polls behind either Babis’ANO or the Pirates/STAN coalition. Gradually, however, as Babis concentrated his attacks on dreadlocked Pirate leader Ivan Bartos, whose ramshackle party organisation struggled to respond, opposition voters swung behind SPOLU as the more professional-looking alternative.

Focussing his campaign on ending Babis’ rule, Fiala benefited the most from a last-minute swing to the opposition caused by the revelation of yet another scandal over the billionaire’s finances in the Pandora Papers. Fiala also cleverly highlighted the relatively new issue of rising inflation and energy prices, blaming Babis for causing an economic crisis that required the ODS’ traditional policy of belt tightening.

He was also helped by the format of the two commercial TVs’ main election debates, which promoted him as the SPOLU candidate against Babis, while Bartos and STAN leader Vit Rakusan took it in turns. Fiala’s calm, softly spoken demeanour marked him out as the reasonable, centrist alternative amid the often bitter duels between Babis and Bartos.

In the election SPOLU just edged ahead of ANO, winning 27.8% to the billionaire’s 27.1%, though it trailed by one seat in terms of parliamentary seats, by 72 to 71. Together with the Pirates and STAN, the opposition now has 108 seats in the 200-member chamber.

The ODS tally was though just 34 seats, only one more than STAN’s 33, and little more than the 25 the ODS won in 2017. Nevertheless, Fiala was the opposition’s unquestioned choice as premier and attempts by Babis to break SPOLU apart never got off the ground. The ODS was also later able to secure the key post of finance minister. Fiala has now talked about SPOLU continuing into the next elections in late 2022 for one third of the upper house.

Fiala’s next big test was in handling the government formation negotiations with Zeman, who has built himself a powerful position as political powerbroker despite his limited powers under the constitution. In this he was lucky, because Zeman’s health finally gave out after a lifetime of heavy drinking, and he was rushed to hospital suffering the effects of cirrhosis of the liver just as the post-electoral jockeying began.

Zeman had initially tried to give Babis first chance to form a government, but the billionaire quickly turned it down as he began to focus on mounting his next campaign, to succeed Zeman as president in spring 2023.

Zeman then dragged out the appointment of the new cabinet by meeting each minister individually at the president’s country retreat, interrogating them from behind a plexiglass cubicle after he contracted coronavirus (COVID-19).

The president had warned Fiala right from the start that he objected to Jan Lipavsky, the Pirate nominee for foreign minister, and would attempt to block him, a power that he had assumed under Babis but which is not in the constitution.

This was a serious danger for Fiala, because it would confirm fears that he would be a weak premier and that Zeman would continue to have a strong voice in the country’s foreign policy, which he has used to promote closer links with Russia, China and Israel.

As Zeman probably intended, vetoing Lipavsky would also have caused ructions inside the Pirates, who were already being talked about as the most likely party to exit the government after their poor electoral showing. Zeman was targeting the coalition’s weakest link, as some of the more radical Pirates are already chafing at working with their more conservative partners.

Yet Fiala refused to get into a confrontation with Zeman, while insisting that he would back Lipavsky and would if necessary refer the issue to the constitutional court for a judgement on the president’s powers. Facing a likely defeat in such a court case, Zeman backed down, and should finally appoint the government on December 17-18, two months after the election.

There are rumours that there was a secret backroom deal between Fiala and Zeman, and certainly the new premier has agreed to hold regular discussions with the president. Yet the public perception remains that the premier has won his first battle with the president and this will affect their future relationship, as well as boosting the premier’s standing inside the government. At the same time, Fiala did not humiliate the notoriously vengeful president, despite calls by some commentators for Zeman to be cut down to size.

Whether this peace deal will be durable is doubtful. Fiala can be sure that if his ministers make any mistake, Zeman will immediately remind him that his cabinet "lacks professional competence", as he pointed out in an official statement. Foreign policy will probably remain a flashpoint, even if Fiala now keeps Lipavsky on a tight leash.

Throughout these tests Fiala has emphasised decency, which he believes is not a weakness, and has avoided conflicts whenever possible. This consensual style has proved successful in building up SPOLU as a viable alternative, fighting the election campaign against Babis, and negotiating with Zeman over forming the government. His skill in forging compromises as well as his new-found authority should help him to run the five-party cabinet in an effective way, though many future conflicts will have to be tackled head-on, rather than just avoided.

After passing these first tests, the key question that remains is whether the ODS powerbrokers will allow Fiala to govern in such a consensual way, or whether they will demand a return to the party’s corrupt old ways and its ideological shibboleths, such as austerity budgets, hostility to the EU, and (more recently) culture wars and scepticism about climate change. As so often in politics, Fiala’s most dangerous enemies will be behind his back, within his own party.