Protest-riven Bulgaria heads for its toughest winter in decades 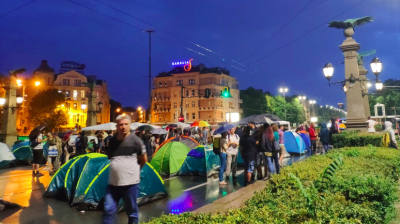 After nearly 50 days of mass protests against the government of Prime Minister Boyko Borissov and the chief prosecutor Ivan Geshev, Bulgaria is heading towards its toughest winter in decades. The political deadlock adds to fears the country will be unable to avoid catastrophe brought on by the economic contraction and an expected new wave of coronavirus (COVID-19).

Hundreds of thousands of people have taken to the streets of Sofia and several other towns, night after night. They carry placards demanding “Mutri [mafia] out!” or mocking Borissov as a “pumpkin” — in Bulgaria “pumpkin” indicates someone as stupid as if he had a pumpkin on his shoulders instead of a head. As their anger with the authorities escalated, they threw eggs and tomatoes at government buildings, blocked roads and bridges, and some set up tents in central Sofia.

Despite this, the protesters remain friendly with each other and aim to avoid violence. As the weeks go by, their energy is flagging, while the government and Geshev continue to insist they will not resign. This deadlock could last for months — unless the protests get new energy in the autumn when people return from their holidays.

Analysts are divided in their expectations on the possible development of the crisis, with some expecting that Borissov will resign to avoid dealing with the twin health and economic crises looming this winter. Others believe he will be ousted by his own people or by the angry crowds. In any of these scenarios, he looks set to be the biggest loser from the current situation.

Although Borissov’s ruling Gerb party still holds first place in the polls, it is not in a position to form another government without significant support from other parties. And the longer Borissov delays his resignation — which now seems inevitable — the more support Gerb will lose.

Borissov twice gave signals he was ready to resign but later backtracked, fuelling the accusations from protesters and opposition politicians that he is completely dependent on the ethnic-Turk Movement for Rights and Freedoms (DPS), its chairman of honour Ahmed Dogan and party member and controversial businessman Delyan Peevski, all of which have become synonyms for corruption. Borissov’s critics have suggested that the DPS — a small party that is formally in opposition but believed to wield considerable power behind the scenes — did not allow him to resign as he had given too many corrupt promises to them that he has yet to deliver.

As the protests entered their second month in August, Borissov made an unexpected move, proposing to stand down if the parliament and President Rumen Radev agree to call a Supreme National Assembly and make constitutional changes. The following day, Gerb released a proposal for an amended constitution.

However, this was seen as an attempt to divert attention or to secure more time, and failed to quell the protests.

Looking more closely at Gerb’s proposed new constitution, it would actually take power from Radev and give more power to the chief prosecutor.

Radev, who has repeatedly spoken out in support of the protesters, said a government that “methodically tramples on the separation of powers, violates the law, stifles freedom of speech cannot propose changes to the constitution”.

By law, calling a Grand National Assembly can be proposed only by the parliament with the approval of more than half the MPs, and the president must approve it too.

Radev also stressed that the protesters are demanding the resignation of the government, which, he said, has lost any credibility.

Lubomir Alamanov, a prominent PR expert, made a similar point, noting that the protesters want Borissov’s resignation, not for him to start changing the constitution. He added that Borissov’s proposal is “yet another Perestroika” simulating real decisions.

Alamanov pointed out that, by law, the current government would stay in power during the Grand National Assembly, unless the parliament, which is controlled by Borissov’s ruling Gerb party, specifically instructs it to form a new government. Moreover, the procedure for calling a Grand National Assembly would take between two and five months, during which time the government would stay in power. In fact, if Borissov’s proposal is accepted, it could potentially give him years of power, as the constitutional changes could theoretically be debated for years.

On August 25, Gerb started consultations with all political parties in parliament, seeking support for its idea. It is unclear whether Gerb will gain the needed support.

Since both Borissov and Geshev seem steadfast in their refusal to simply step down, protesters embarked on their campaign of civil disobedience, blocking key roads in Sofia and other big cities, and setting up tent camps. The latter have already provoked aggression several times. The police destroyed them once, arresting some of the protesters, but Borissov appears to want to avoid a violent resolution to the protests, and said the police should not remove the camps by force anymore.

The protests have shed a light on new potential political leaders who are not related to the current main parties and who seem to have the potential to make actual reforms and start cleaning up the corruption at all levels of power in Bulgaria.

It was Hristo Ivanov, one of the leaders of Democratic Bulgaria, who sparked the anger and disgust that led to the protests. At the beginning of July, he released a video on Facebook, in which he travelled by boat to Dogan’s secluded private villa. The video shows him being pushed away by security. Ivanov claims it was illegal to restrict access to the public beach in front of the residence.

In the following days, Ivanov and his supporters revealed other corrupt schemes related to Dogan. On July 21, Ivanov said he would continue to reveal the “corrupt model” under which the government operates in dependence on Dogan. He made a video statement to Bulgarians in front of Varna coal-fired power plant, which was acquired by Dogan for an undisclosed sum in September 2018, and then granted BGN54mn (€27.6mn) for securing the cold reserve.

The deal raised questions regarding Dogan’s already very strong influence in Bulgarian politics and on the energy sector. Critics, including NGO the Anti-Corruption Fund (ACF), expressed concern, not least because the power plant’s ability to actually produce the necessary electricity was in question. Although the deal was referred to the Bulgarian prosecution twice, Geshev and his predecessor Sotir Tsatsarov refused to launch an investigation.

In the video, Ivanov accused Gerb of ruling in secret coalition with the DPS and of making “the ugliest of all unfair deals” by giving Dogan the cold reserve, which had been denied for years to Varna TPP’s previous owner, the Czech utility CEZ.

Moreover, Ivanov said it is still unclear where Dogan obtained the money to pay for the power plant. Valeri Simeonov, the leader of the National Front for Salvation of Bulgaria (NFSB), one of several small far-right parties within the ruling coalition led by Gerb, admitted that the cold reserve deal was a mistake and pledged it will be ended.

Radev is the other politician who has benefitted from the protests as he has been one of the most vocal critics of Borissov and Geshev.

An attack on the presidency was the second trigger for the protests. After Ivanov released the video on Dogan’s villa, Radev was the first to confirm Dogan was guarded by the state security services and insisted on an investigation, as Dogan does not hold an official position that entitles him to state security. The following day, Geshev organised an action movie-style raid on Radev’s offices, and the special prosecution arrested two of his advisors on unproven suspicions of influence peddling. The raid rocked Bulgaria as it was seen as an assault on the presidential institution and proof of Geshev’s dependence on the DPS.

Although these two politicians have gained support from the protests, they are not their organisers, only supporters. Three men, known as the Poisonous Trio after a talk show critical of those in power, were the first to go out to defend the presidential institution and have become the informal leaders of the protests. The trio comprises PR expert Arman Babikyan, human rights lawyer Nikolai Hadzhigenov and sculptor Velislav Minekov.

The Poisonous Trio claims it has no political goals but is leading the protest to oust the mafia from state institutions and restore democratic processes in Bulgaria, which has been the most corrupt EU member state for years.