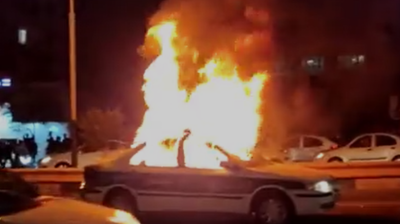 The challenge to the authorities is now said to be the biggest since 2009's Green Revolution movement. / Social media.
By bne IntelIiNews September 25, 2022

Establishing the latest situation in Iran, a country on September 25 torn by violent unrest for a tenth straight night, has become a formidable task for foreign media. Most communication with Iran is restricted to telephone calls, given the government’s decision to largely take Iranians offline to disrupt those who want to topple the regime. There is little reporting from the ground.

Whether the authorities have substantially stepped up their attempts to put down the protests is not even clear to many at different ends of the country. President Ebrahim Raisi on September 25 pledged to crack down on “those who oppose the country’s security and tranquility”. The protesters, he said, would be dealt with “decisively”. The head of Iran's powerful judiciary, Gholamhossein Mohseni-Ejei, earlier in the day was reported by the judiciary's official Mizan Online media channel as emphasising "the need for decisive action without leniency" against the primary instigators of what he described as "riots".

The authorities are referring to around 40 people killed during clashes between protesters and security forces, including five security personnel. But activists say the death toll is at least 50 and likely to be even higher. Many hundreds have been arrested.

Demonstrations have spread to most of Iran’s 31 provinces and almost all urban centres. The weekend saw demonstrators rally in support of the protesters in Iran in countries including Germany, Greece, Italy, Spain, Lebanon, Turkey, the UK, Canada and the United States.

The protests in the theocratic state began as a reaction to the death of Mahsa Amini, 22, an ethnic Kurd who fell into a coma and died after an encounter with Tehran morality police who were enforcing laws on the wearing of the hijab head covering and other legally decreed attire by women. Witnesses have claimed Amini was beaten. Officials have denied that was the case but have promised a probe into the events that led up to her death. The cause of death would be established by a medical examiner, they said.

Observers have started referring to the demonstrations as the biggest challenge to the regime since the anti-government protest in 2009, known as the green revolution, which followed contentious presidential elections.

“The main difference between the current protest compared to the green movement in 2009 is that now people are fighting back; they are not afraid of the brutal regime,” Sima Sabet, an Iranian journalist and presenter on the Iran International TV station, told the Guardian.

“Demonstrators are now burning ambulances because the government is using ambulances to move their security forces not to rescue people. The protesters are now using different tactics; they move between all cities and make it hard for security forces to control all locations,” Sabet added, also noting: “They have tactics about how to send their videos outside of Iran despite the cut-off of the internet… [and] for the first time now in Iran women are burning their hijabs with the support of men.”

Meir Javedanfar, who teaches Iranian politics at Reichman University in Israel, was quoted by Reuters as describing the protests as a milestone for Iranians angered by "a corrupt and incompetent regime". "These protests will not be the last. We will see more. But we are unlikely to see a revolution until and unless there is a leader and at least part of Iran's armed forces starts siding with the people against the regime. None of this has happened yet," he said.

One tactic used by the state against the protesters is the organising of counter-demonstrations. Such events, in which some sections of the assembled crowds called for the execution of “conspirators” behind the unrest, took place in several Iranian cities on September 23.

Sources described to the BBC how in parts of at least one small city, Oshnavieh, in northwest Iran’s West Azerbaijan province, government forces fled after losing effective control. They were said to have retreated to the outskirts before returning and regaining control.

In terms of the level of the security forces’ response to the protests, Amnesty International has warned that evidence it gathered indicated "a harrowing pattern of Iranian security forces deliberately and unlawfully firing live ammunition at protesters". Government forces, it alleged, shot 19 people dead—including three children—on the night of September 21 alone.

US-based media watchdog the Committee to Protect Journalists said 11 journalists have been detained in Iran in the past week.

Radio Farda reported that on September 25 in Tehran, students gathered at Tehran University to chant slogans including "Freedom, freedom, freedom!" and "We will fight, we will die, we will take back Iran!"

On September 23, the US announced that it was easing export restrictions on Iran to expand Iranians' access to internet services. The Treasury said in a statement that it intended to increase support for internet freedom in Iran by updating a general licence allowing access to certain services, software and hardware.

SpaceX CEO Elon Musk responded to the US announcement by saying that he would activate the firm's satellite internet service, Starlink, to cover Iran.