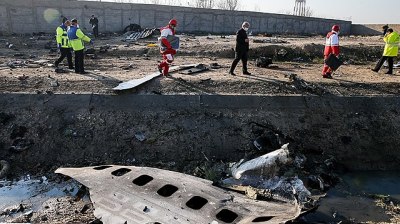 Ukrainian forensics head Alexander Ruvin from the Kyiv Research Institute of Forensics has suggested from evidence obtained that passengers on Ukrainian International Airlines (UIA) flight PS752 were out of their seats before two missiles hit the plane outside Tehran in early January, Glavcom reported.

His interview with the Ukrainian newspaper comes amid heightened tensions between Kyiv and Tehran, which have been edging towards international legal proceedings that would be pursued by Ukraine against the Iranian state. If Ukraine moves ahead with the action, it would mean the release of significantly more information about the airliner tragedy that the Tehran theocracy has endeavoured to keep under wraps.

“And [yet] we saw the corpses of the dead lying on the ground, without seats. To make it clearer to you, I would say that if the people were fastened, they would fall with their seats, as was the case with passengers of [shot-down] flight MH17 [in Ukraine]. And what we saw in Iran means that there was already panic on the plane. There is reason to believe that it was burning inside and through the holes, black smoke came out.”

Ruvin said that after the plane came down the Iranian side immediately went to remove all parts of the aircraft from the crash site while still allowing people in the vicinity to enter the crash grounds. He added that several mobile phones and tablets which belonged to the 176 deceased were taken from the Ukrainian team by the Iranians.

The Ukrainian official stated that the Iranian side repeatedly obfuscated during the investigation and blocked the foreign team from investigating the site.

“We did not find the lower part of the plane, we found only four seats, and the plane had 167 people plus crew,” he noted.

Earlier, on May 18, Ukraine said it would go to the UN International Court of Justice (ICJ) if negotiations with Iran over the incident did not progress satisfactorily.

“If negotiations reach an impasse, then we will be forced to appeal to the international arbitration court, the UN International Court of Justice. This is not only about Ukraine, but about a united front of the states of Canada, Great Britain, Sweden, Afghanistan and Ukraine,” Ukraine’s Deputy Minister of Foreign Affairs Yevhen Yenin said, referring to other countries from where other victims of the tragedy came from.

He added that he hoped that Iran would fulfil its international obligations and hand over the black box flight recorders taken from the plane wreckage to enable their decryption.

“So far, Iran has not completed this process. However, a country where such an incident has taken place must ensure the immediate reading of these black boxes or transfer them to a third state," said the official.