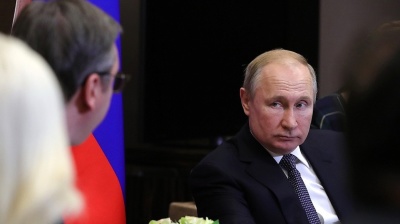 Bulgaria is intentionally delaying the completion of its part of Turkish Stream pipeline, while Serbia has almost completed its part, Russia’s President Vladimir Putin said on December 4 at a press conference with his Serbian peer Aleksandar Vucic.

Putin said that the Serbian section of the pipeline should be completed within a few weeks.

“But what we see, despite the numerous assurances, despite repeated requests to the Russian side to ensure the supply of our gas through Turkey to Bulgaria, we see that the Bulgarian side […] deliberately delays the implementation of the project on its territory. I want to say this directly and publicly,” Putin said at the joint press conference in Sochi.

He added that Sofia is delaying the project under external pressure and that Russia could look for other opportunities in Southeast Europe.

Borissov responded to the accusation, saying that he has fulfilled all his promises regarding the project and expressing doubts that Serbia will be ready before Bulgaria.

On the other hand, Putin pointed out that Russia will increase its investment in Serbia’s energy sector thanks to the good relations between the two countries.

Vucic’s visit comes shortly after in November Serbia’s intelligence services revealed a large-scale intelligence operation carried out by Russian spies and Serbian military officers. This was revealed after a video showing a meeting between a man later identified as Lt. Col. Georgy Kleban, a former assistant military attaché at Russia’s embassy in Belgrade, and a Serbian retired army officer, identified as Z.K.

However, the two leaders did not comment on the scandal at the press conference. Moreover, Vucic stated that his country will continue its cooperation with Moscow "no matter what anyone says".

Putin did not miss the opportunity to point out the cooperation with Serbia in the defence industry, but without going into many details.

A day earlier, Vucic made a surprising announcement that his country will stop buying weapons, but will continue developing its military. The statement came after Belgrade was strongly criticised after rumours have appeared that Serbia might acquire Russian air defence systems that would give Putin a serious advantage in the region. At the time, Vucic said that Serbia cannot afford to buy these systems unless they are gifted.

Meanwhile, Putin once again backed Serbia regarding Kosovo, saying that while Russia’s position on Kosovo – whose independence it rejects – remained unchanged, it would back a compromise solution if it is in favour of Serbia.

The Russian leader also noted that his country has proposed to renovate the Serbian air fleet, by delivering aircraft and opening a regional centre for maintenance and overhaul of Russian aviation equipment at Belgrade airport.