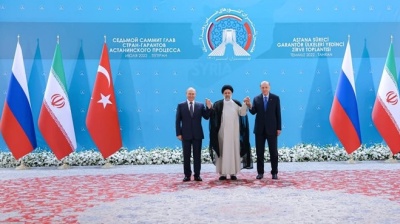 Russian President Vladimir Putin arrived in Tehran on July 19 for a series of talks with his Iranian and Turkish counterparts.

It is his first trip beyond the former Soviet Union since Russia invaded Ukraine in late February. The West will watch closely for any sign of a major strengthening of Iranian-Russian ties and for any backsliding from Turkish President Recep Tayyip Erdogan on matters that, as a Nato member at a time of a major war in Europe, Turkey would be expected to keep ringfenced from Russian influence. US national security officials last week warned that Iran may be about to provide Russia with hundreds of drones—some combat-capable—that it could use in the Ukraine conflict, but Tehran has denied that that is the case.

Speaking after his meeting with Russia’s leader, Iran's Supreme Leader Ayatollah Ali Khamenei lost no time in implying that the West was to blame for the war in Ukraine.

"If you did not take the initiative, the other side would have caused the war with its own initiative," Khamenei told Putin, adding: “If the road is open to Nato, it knows no boundaries and if it was not stopped in Ukraine, they would start the same war some time later under the pretext of Crimea.” 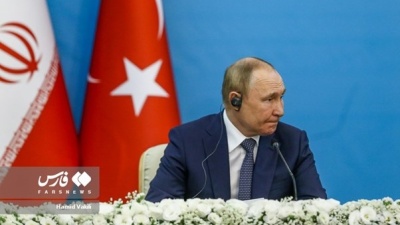 Putin at a trilateral session in Tehran on July 19 (Credit: Fars News Agency).

Putin was reported by local media to have replied: “No one is in favour of war, and the loss of ordinary people’s lives is a great tragedy, but the behaviour of the West made us have no choice but to react. Some European countries said that that they had been against Ukraine’s membership of Nato, but then agreed under American pressure, which shows their lack of independence.”

Iranian state TV also reported Khamenei as telling Putin that Tehran and Moscow needed to stay vigilant against “Western deception”, and in calling for long-term cooperation between Tehran and Moscow that would take in greatly expanded trade and investment, Iran’s leader said that the US dollar should be gradually taken out of global trade.

Ahead of Putin’s trip, the Russian ambassador to Tehran, Levan Dzhagaryan, said in an interview with Iran’s Shargh newspaper that Iran and Russia were now in a “single fortress”.

Given the huge sanctions response of Western countries to Russian aggression in Ukraine, Russia has replaced Iran as the world’s most sanctioned nation. Moscow will no doubt hope to pick up from the Iranians methods on how to dodge and counter sanctions, with some cooperation in sanctions evasion also to be expected. For instance, with many Russian banks cut off from the SWIFT international payments system, Moscow is developing an alternative system in which Iranian banks could be included.

But there is a particularly big problem with the new reality in which both countries find themselves struggling against heavy sanctions—both Iran and Russia are major oil and gas producers and competition between them has grown more intense since the start of the Ukraine war as Russia has redirected more of its oil exports to China and India at substantially discounted prices. China is a particularly important market for Iran as it strives to sell its oil in return for badly needed hard currency beyond the radar of US sanctions enforcers.

"On the economic dimension, the war has significantly worsened their relationship. Moscow is eating Tehran’s lunch in commodity markets and has even fewer resources to throw at projects in Iran," Henry Rome, deputy head of research at Eurasia Group, was quoted as saying by Reuters on July 19.

On the brighter side for Russian-Iranian cooperation in oil and gas, coinciding with Putin's visit, the National Iranian Oil Company (NIOC) and Russia's Gazprom signed a memorandum of understanding potentially worth around $40bn. According to the memorandum, Gazprom will help NIOC develop two gas fields and six oil fields and take part in liquefied natural gas (LNG) projects and the construction of gas export pipelines.

Putin’s summit with his Iranian and Turkish counterparts will be presented by the Kremlin as showing that Russia still has influential allies. However, the US responded to Putin’s arrival in the Iranian capital by saying it showed how isolated Russia has become since it invaded Ukraine.

Also on the agenda for the visit, was a trilateral discussion of the situation in Syria, where Iran and Russia are aligned with Damascus and Turkey backs some of the remaining rebels in the remnants of the longrunning civil war. Tehran and Moscow have been attempting to dissuade Erodgan from mounting another incursion into Syria to attack Kurdish militants, saying it would destabilise the situation on the ground.

Erdogan nevertheless said he expected backing from Russia and Iran "in its [Turkey’s] fight against terrorism".

July 20, meanwhile, may bring more news on whether Russia and Turkey have taken steps forward with efforts to negotiate an end to the blockade of Ukrainian grain exports in the Black Sea. It is preventing millions of tonnes of urgently needed grain from being delivered to countries around the world. Putin said in Tehran some progress had been made on the issue.

He thanked Erdogan for mediating the grain talks between Moscow and Kyiv, saying: “With your mediation, we have moved forward. Not all issues have yet been resolved, but the fact that there is movement is already good.”

Ukraine will receive $5.5bn in support from the US later this month
6 hours ago
John Malkovich to turn Skopje into Hollywood of the Balkans
6 hours ago
Envoy says start made on construction of Turkish attack drone factory in Ukraine
16 hours ago
Huge explosion rocks Russian airbase on the Crimean peninsula
19 hours ago
Russia cuts oil flow via Ukraine's Druzhba pipeline, blaming sanctions for blocking transit payments
19 hours ago