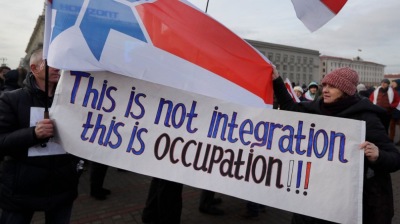 Russian President Vladimir Putin and his Belarusian counterpart Alexander Lukashenko failed to secure a deal over further "integration" of political and economic systems of the two states during five-hours of talks on December 8 talks in Russia’s Black Sea resort city of Sochi.

The meeting was held in the Bocharov Ruchei presidential residence and Putin and Lukashenko made no statements to the media after what were clearly difficult talks. However, Russian Economic Development Minister Maxim Oreshkin told reporters that the presidents agreed to meet again in St Petersburg on December 20 to continue their talks.

Oreshkin described the talks as fruitful. “Very serious progress was made with regard to a whole number of areas, including agriculture, telecommunications, customs affairs and the regulation of the oil market,” he said, according to Russian media. “Even the sides’ positions on oil and gas were brought very significantly closer together.”

The meeting comes a week after it was reported that a preliminary deal had been struck on more closely integrating the two countries in a step towards creating a single market similar to the European Union (EU). A top diplomat said Lukashenko and Putin have signed off on a single parliament and merged many aspects of the two economies, Belsat reported on December 1.

Both countries are already members of the Eurasia Economic Union (EEU) that is supposed to allow the free movement of capital, labour and goods amongst members. One of Putin’s long-term foreign policy goals is to create a single market “from Lisbon to Vladivostok.”

However, the idea of bringing Belarus and Russia closer together has not been popular in Minsk. The talks took place against a background of rare public anti-Putin protests in Minsk on the same day. Up to 1,000 pro-Western activists gathered in Minks downtown due to fears that Putin-Lukashenko talks could lead to the loss of Belarus’ independence.

The next day, protesters against Minsk's integration with Russia demonstrated in Minsk for a second consecutive day. Around 500 people adopted a resolution saying that citizens of Belarus are flatly opposed to the so-called deep integration with Russia, and would not recognise any agreements between the "dictatorial regimes of Lukashenko and Putin" within the framework of the so-called Union State, according to the BelaPAN news agency.

"Who the hell needs such a union?"

Despite December 8's failure to secure a deal in Sochi, the same day Lukashenko and Putin "exchanged messages" of greeting on the occasion of the 20th anniversary of the signing of the treaty on the formation of the Union States of Belarus and Russia.

"This treaty brought the Belarusian-Russian relationship, based on multi-century friendship, historic closeness and the commonality of the vital interests of our nations, to the level of a genuine alliance and strategic partnership," Lukashenko said in a message, according to his media office.

In November, Lukashenko slammed the Union State as Minsk faces new conditions in the talks with Russia "every year". "As a result, our economy incurs more and more losses. Who the hell needs such a union? The Russian president knows about it. We are friends with him. I can say it openly to him, mincing no words. He can do the same," he said.

"What kind of a union is it if every year we incur losses and face increasingly unfavourable conditions there? This is not Ok," he added at the time.

Lukashenko added that Minsk does not claim "anything and do not ask for anything" from Moscow. "We demand, as we once agreed on, equal terms for economic operators and ordinary people. This is what a union should look like. In this case you will never cast a stone at Russia, and we will also welcome such a union [with Russia]."