“Putin must be happy with events in Minsk” says Belarusian analyst 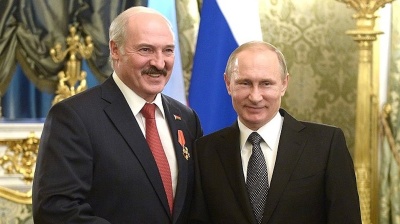 The clampdown on the opposition has worsened Minsk’s relations with the West, making President Lukashenko more amenable in future talks with Moscow — including on the unification of Russia and Belarus.
By Linas Jegelevicius in Vilnius July 22, 2020

Having barred Victor Babariko and Valery Tsepkalo, two key challengers of the incumbent Belarusian president, Alexander Lukashenko, from the presidential race, official Minsk braced last week for a 7,500-strong rally, organised by supporters of the kicked-out candidates and those of Svetlana Tikhanovskaya, the wife of prominent blogger Sergei Tikhanovsky who was also barred from the election. Tikhanovskaya is the last genuine opposition candidate in the race. Approached by bne IntelliNews, Alexander Klaskouski, a political analyst in Minsk, said that protests are very likely to pick up steam in the days to come.

As the official campaign of the presidential election has been kickstarted, protests and rallies are allowed by law. However, Klaskouski warns, the reality can be very different, as the authorities have clamped down on opposition protests throughout the last couple of months.

The rally held by Tikhanovskaya on July 19 drew between 7,500 and 10,000 participants. With Tsepkalo and Babariko out of the game, their election teams have now joined forces with Tikhanovskaya’s staff and supporters, which definitely makes the campaign more interesting, Klaskouski believes.

However, the question at the end of the day is how to ensure that the election results are not rigged – in the election precincts only a handful of election observers, in fact only six, represent the opposition, according to the analyst. The opposition candidates’ managers have not tried to solve the issue — out of fear of being accused of inciting unrest or other offences.

Belarusians are guessing this week whether Belarus’ election watchdog, the Central Election Commission (CVK), will allow Tikhanovskaya, the last credible opposition candidate, to go all the way to election day on August 9.

According to the Belarusian analyst, it depends on several factors, including her ability to gather much larger crowds than last Sunday.

If thousands of people turn out in her support, the election authority will very likely start harassing her, ending her campaigning abruptly at some point before August 9, Klaskouski believes.

Minsk has seen that kind of thing already during the collecting of signatures, a mandatory leg of the campaign. The authorities were unhappy about the protests popping up here and there, so they severely clamped down on the protesters. Over 700 people were detained over the last couple of months in Minsk, according to the Ministry of the Interior.

But in order to see a Minsk-type Maidan a much larger turnout of protesters than those 7,500 last Sunday is needed, Klaskouski, whose son is a former political prisoner, believes.

He says that having seen Belarusians’ great enthusiasm about the presidential race – hundreds of people were lining up in half-kilometre queues just to be able to put their signature in support of their candidate — the syloviki (riot police) started arresting people, thereby instilling fear in many. As the word about those who got beaten up and detained spread, the restrictive measures worked pretty well – they prevented many from coming out in protest on the streets, the analyst emphasised to bne IntelliNews. He expects more protests to erupt – many people in Belarus tend to say these days: “We’ve had enough of the authorities and the president…”

The street protest element, coupled with strong electoral campaigning, is an inevitable part of an effort to depose an authoritarian leader, Klaskouski stated. Only that can trigger a schism in the higher echelons of power, especially in those that are in charge of law enforcement.

Despite the pressure on official Minsk, Klaskouski said he believes “Lukashenko will succeed in retaining his power despite some perhaps rocky events until August 9. The problem, however, is that the incumbent president does not have a plan for what to do next, how to improve the lives of ordinary people and so on, especially since the political heatwave in the country is not going to subside after August 9.”

As no credible independent poll on Lukashenko’s support among the population has ever been conducted, it is hard to say how many Belarusians still trust the president. It is obvious, however, that the support he has is low, Klaskouski underlined.

“Although the majority is clearly very disappointed with him, the frustration has not yet reached the boiling point, beyond which the people would start flooding onto the streets. But Belarus may be nearing it, although part of the society, including the clan of law enforcers and the veterans reminiscing about the Soviet past and enjoying cushy social benefits, still support Lukashenko,” the analysts said.

There are also questions about whether Tikhanovskaya will be able to mobilise public support. Simply speaking, with their own candidates eliminated, Victor Babariko’s and Valery Tsepkalo’s campaign managers had no other choice than to rally behind Tikhanovskaya, who is still in the race. The three of them have perhaps set their eyes on future political campaigns and the remainder of the campaign is a good litmus test for their unity and ability to find common ground.

However, the analyst noted, Tikhanovskaya, like the other two key women who are now the main opposition figures — Marina Kolesnikova, the chief coordinator of Babariko’s campaign, and Veronika Tsepkalo, the wife of Valery Tsepkalo — is inexperienced as a politician and resonates little with the grassroots.

For example, Tikhanovskaya admitted honestly that she is being driven by love for her husband, who was kicked out of the race. This is hardly enough to make many Belarusians jump up from their couches and join her political campaign, Klaskouski said. She lacks both rhetoric skills and organisational skills, musts for a political leader, he maintained to bne IntelliNews.

The rest of the participants of the presidential race, like Anna Kanopackaja, a lawyer and a former MP, Sergeij Cherechnia, chairman of Belarus’ Social Democratic Party, and Andreij Dmitrijev, co-chairman of the Speak the Truth movement, have been dubbed mere sparring partners of Lukashenko who present no real challenge to the incumbent, Klaskouski said.

There are rumours that the Central Election Commission added signatures in their support to make them appear stronger, allowing them to clear the 100,000-signature threshold to secure a spot on the ballot. Although they deny that, according to Klaskouski they are political puppets whose strings are being pulled by Lukashenko, to whom they belong in one way or another.

And what is Russian President Vladimir Putin, who is readying for the Duma (Russian parliament) election in 2021 and the presidential election in 2024, likely learning from the events in Belarus? Won’t he retaliate against Lukashenko for his refusal to unite Belarus and Russia into a single Slavic state, which would be led by Putin?

Klaskouski believes that many in Moscow are happy with the harsh clampdown on the Belarusian opposition by Lukashenko: “Many now in Moscow expect that Minsk’s relations with the West will deteriorate as a result and Minsk will become easier to talk to, including about the single state.”

According to the analyst, it is only a matter of time when Putin will put the proposal back on the table.

As for the European Union, it seems it is set to keep a semi-closed eye on the events in Belarus, unless blood is spilt there. The reason for such a stance is Brussels’ apprehension that Belarus will move closer to Russia, which will make all the efforts to bring Belarus closer to the Western world in vain, the analyst emphasised.