Putin’s popularity holds steady in face of protests, but Russians divided on Navalny 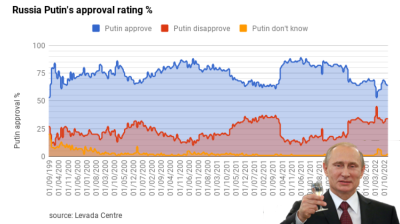 Putin's personal popularity has dropped by only one percentrage point since the mass demonstrations broke out in January, and the majority of Russians remain largely indifferent to the fate of activist Alexey Navalny
By bne IntelliNews February 7, 2021

Two polls from independent pollster the Levada Center found that Russian President Vladimir Putin's approval rating has held steady despite the biggest nationwide protests in a decade over the last two weekends, but that the majority of Russians are indifferent to the fate of jailed anti-corruption activist and opposition politician Alexei Navalny.

The two protests called by Navalny, who was arrested on January 17 on his return to Russia from Germany, have done little to hurt Putin’s popularity, which fell from 65% in November to 64% in January, according to Levada.

Putin’s popularity has been around 65% for almost the whole of the two decades he has been in office, although as bne IntelliNews reported, it fell into the 50s during the worst of the coronacrisis in the middle of 2020 as the government scrambled to cope with the effects of the pandemic. At the same time the government’s image was improved by the epidemic in Russia as it responded reasonable well to the emergency.

The Levada Centre political poll was conducted in the run-up to Navalny’s sentencing, when he was given 2.8 years in jail on February 2. However, over the course of the year, his rating among younger respondents had dropped 17% to 51%, Levada said as cited by Reuters.

“The euphoria in the liberal community is clearly very exaggerated. The main mass of the population is responding inertly to all the events linked to Navalny,” Lev Gudkov, director of the Moscow-based Levada pollster, told Reuters.

“It’s got a bit worse among young people, but it practically hasn’t changed for the main mass (of people),” he said of the rating.

Putin’s trust rating has fallen further, but he remains the most trusted politician in Russia by a wide margin with a rating of 29%, five percentage points down from October, while that of Navalny rose to 5%, putting him in sixth place, Levada said.

The poll highlighted dissatisfaction with the authorities concentrated in the younger generations, with 48% of 18 to 24-year-olds saying the country was moving in the wrong direction.

A separate poll of support for Navalny found similar results, with Navalny and his decision to return being strongly supported by young people but leaving the rest of the population largely indifferent. However, within the minority that hold a strong opinion on Navalny, Russians are evenly divided between those that support him and those that disapprove of his actions.

“What you can see here is two smaller groups of staunch opponents and supporters of Navalny. But there is a vast majority that is being largely neutral/apathetic. It includes two equally sized wings, each leaning towards and against Navalny,” well-known Russian journalist Leonid Ragozin tweeted. “This “neutral/indifferent” majority is the battlefield between Putin and Navalny. Truth is, it is neither neutral nor indifferent – it is pragmatic, attentive to public mood, mindful of Russia’s sad history of devastating revolutions, wars and volatile democracy.” 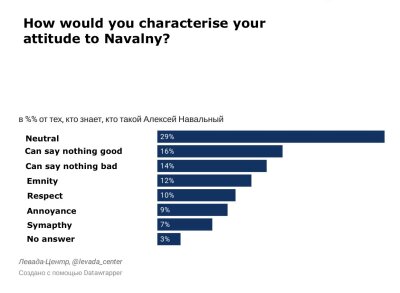