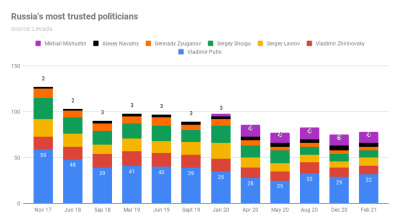 Russian President Vladimir Putin’s trust rating improved by 3 percentage points to 32%, while that of jailed anti-corruption activist and opposition politician Alexei Navalny fell by one point to 4% between December 2020 and February 2021, the independent pollster the Levada Center found in its latest survey, despite country-wide anti-government protests in January, the pollster said in a press release on February 25.

Trust in Putin has taken a hit in the last two years by the multiple shocks that have hit the economy and the six-year long stagnation of incomes. Russians that came out to join the nationwide anti-government protests in January called for by Navalny following his arrest and jailing in January protested not only against the injustice of Navalny's jailing, but more because they were dissatisfied with the government’s performance and the falling standards of living, according to a previous Levada poll. The majority of Russians are indifferent to Navalny's fate, while those with an opinion are evenly divided between supporting him and disapproving of him, the survey found.

Navalny scored a lot less well than several establishment figures. One of the quirks of Russia’s young democracy is that the Russian people are uncomfortable with private citizens simply standing up and saying “I want to be president.” As a legacy of 70 years of centralised communist rule there is a feeling that candidates have to be in some way “qualified” by coming from some sort of state organ. Consequently working in government adds legitimacy that Navalny doesn't have. The upshot is politicians from the so-called systemic opposition – the parties in the Duma other than the ruling United Russia – do better than the oppositions outside the Duma.

Prime Minister Mikhail Mishustin is the second most trusted politician in Russia and as bne IntelliNews reported, he has gained in the polls thanks to the government’s fast reaction to the crises of 2020.

Ultra-nationalist leader of the Liberal Democratic Party of Russia (LDPR) and long-standing Duma deputy Vladimir Zhirinovsky fell to fourth place with 8% after his trust rating dropped by one point.

Communist Party of the Russian Federation (KPRF) leader Gennady Zyuganov’s trust rating remains stuck at 4% after it fell from 10% in 2017.

On the basis of the trust ratings, the core group around Putin appears to remain solidly in charge and the most trusted by the people; however, as bne IntelliNews reported, Navalny has shaken up the system and younger members of the systemic opposition are split over whether to support Navalny or not.

While Navalny’s movement is unlikely to oust United Russia or Putin in September’s Duma elections and the 2024 presidential elections respectively, many of the younger members of the KPRF in particular want to ditch their old-guard leaders and modernise the party. The communist party has been the big winner from Navalny's “smart voting” tactics, where he encourages voters to vote for any candidate that is the most likely to oust the United Russia candidate, and the KPRF has seen the number of its seats in the Duma double as a result.

Zyuganov remains devoutly married to the traditional Marxist-Leninist ideas and plays a useful role in splitting the vote as far as the Kremlin is concerned, but with a well developed grassroots political machine and left-wing ideas that resonate well with a broad spectrum of the population, if the young cadres can win control of the party they could offer a serious challenge to United Russia. However, that is unlikely to happen before the September parliamentary elections take place.