Putin’s vote in presidential elections falling, but he still doesn't face a challenger 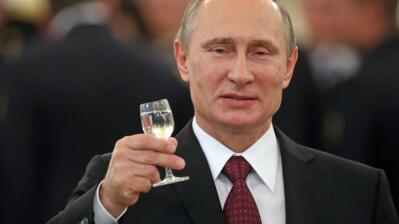 Russian President Vladimir Putin has lost 8 percentage points in a Levada poll on the share he would win if elections were held tomorrow, but none of the other candidates can break above 3%, and Putin would sweep victory. / wiki
By bne IntelliNews December 10, 2021

Russian President Vladimir Putin has lost 8% in a poll by independent pollster the Levada Center measuring the share he would win if presidential elections were held tomorrow, but he is still far in front of any other potential candidate.

Putin has lost 8% in the poll between April 2014, when he commanded a whopping 49% of the poll, to 32% this November as his popularity slowly wanes.

However, his nearest challenger, according to the Levada poll, is firebrand Liberal Democratic Party of Russia (LDPR) leader Vladimir Zhirinovsky, who has seen his share of the vote drop from 4% to 3% over the same period.

The only other potential candidate to score more than 1% in the hypothetic poll is Communist Party of the Russian Federation (KPRF) leader Gennary Zyuganov, whose share of the vote has fallen slightly more from 4% to 2% over the same period.

Jailed anti-corruption activist and opposition politician Alexei Navalny has seen his share of the vote increase fractionally over the same period from less than 1% to 1%, but his appeal has actually fallen, with this dropping from 2% while he was still in Germany last year recuperating from a poisoning attack to drop to 1% between April this year and now, according to Levada’s poll.

After Navalny arrived back in Russia in January he was immediately arrested but at the same time he was subjected to an intense smear campaign by the state-owned media. Nevertheless, although Navalny is widely respected as an anti-corruption campaigner, he is not taken seriously as a politician by most Russians, other polls have shown.

Another Levada survey in February shortly after Navalny organised large public protests against Putin showed the majority of Russians are indifferent to Navalny’s fate, and those that have an opinion are equally divided between approving of Navalny and disapproving of him. Navalny plays the role less of an opposition leader or potential new president than that of a catalyst that will provoke more political awareness in the Russian people and more importantly, within the existing systemic political parties, which has the potential to change Russian domestic politics from within the system.

Levada ask respondents: “If the election of the president of Russia would be held on the nearest Sunday, would you take part in them, and if yes, [which] of the current politicians would you vote for?” Respondents did not pick from a list but themselves named the politician for whom they would like to vote, but could only chose one name.

Among those who had made their choice and were ready to take part in the elections at the time of the poll, Vladimir Putin would win 49% of the votes as of this November, which is 7% less than in April of this year, says Levada. LDPR chief Zhirinovsky would take 5%, KPRF leader 3% and independent Pavel Grudinin would win 2%.

The electoral ratings of political parties among all Russians are stable, with the exception of United Russia, whose rating has dropped by 3% compared to October.