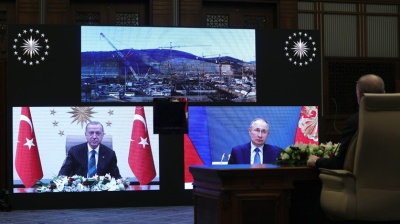 Putin and Erdogan participated in a video link during the foundation-laying ceremony.
By bne IntelIiNews March 10, 2021

Russian President Vladimir Putin said on March 10 that the Akkuyu nuclear power plant is scheduled to start operating as Turkey’s first such facility in 2023 as hoped.

Putin was speaking during a video link with Turkish President Recep Tayyip Erdogan during a foundation-laying ceremony for the third reactor of the $20bn plant.

Russian nuclear conglomerate Rosatom (Russian State Atomic Energy Corporation) is building four reactors at the site on the Mediterranean, near the city of Mersin.

Rosatom is using the most advanced and reliable technologies in building Akkuyu, Putin stated, saying: "Rosatom is the recognised leader in peaceful nuclear development and is applying the most state-of-the-art engineering solutions, economically efficient and reliable technologies in the course of plant construction, and the highest safety standards and the strictest environment protection requirements are met at the same time."

Turkey would like to see the landmark project in operation in time for the 2023 centennial celebrations of the establishment of the Turkish Republic. In Erdogan’s “2023 vision” released in 2010, officials foresaw the launch of three nuclear power plants in Turkey by the time of the anniversary. That is clearly not going to happen. One Akkuyu reactor in operation is the most that can be hoped for.

When completed, the plant is to generate around 35bn kWh per year at full capacity, meeting around 10% of Turkey’s electricity needs.

A subsidiary of Rosatom has secured a $300mn and seven-year loan from Russia’s Sovcombank for the Akkuyu nuclear project, Rosatom said on March 9.

In January, Turkish opposition lawmaker Ali Mahir Basarir claimed that there was a crack in the cement foundation of the project site. Seawater was seeping into the foundation, the Republican People’s Party (CHP) MP claimed. He posted video footage of the alleged crack.

Calling on officials to scrap the project to build the plant, Basarir said the foundation on which the reactor will be placed was first damaged during its construction phase.

Since the construction started in 2018, a group of NGOs has filed a lawsuit with a Turkish court demanding building work be halted due to claimed vulnerabilities of the site chosen for the plant.

“There is a tragedy being established on a foundation that has already cracked twice,” Basarir said.

“Our country is being pulled into an irreversible calamity, because Akkuyu is in an earthquake zone. The foundation is entirely [composed of] water. If there is an earthquake following the construction, the Mediterranean and Mersin will be faced with a tragedy,” Basarir added. The project must be abandoned “while there is still time”, he also said.