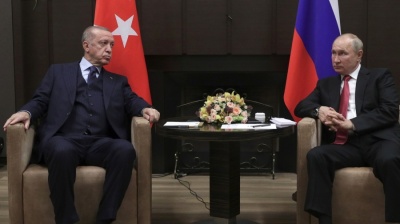 Erdogan is said to have claimed Putin pushed for a drone deal during their meeting in Tehran. / Kremlin.ru
By bne IntelIiNews July 26, 2022

Erdogan told colleagues at a top party meeting on July 26 that Putin approached him during their July 19 meeting in Tehran to suggest the Baykar deal.

“Putin told me that he wants to work with Baykar,” Erdogan reportedly said. “He proposed to establish a factory in Russia as [Baykar] has done in the UAE.”

If Baykar was to produce its attack drones for Putin—who, US intelligence has warned, also appears to have been shopping for military drones in Iran—the move would fly in the face of comments made on July 18 by Baykar CEO Haluk Bayraktar, who told CNN: “We have not delivered or supplied them [Russia] with anything, [and] we will as well never do such a thing because we support Ukraine, support its sovereignty, its resistance for its independence.”

Bayraktar also told the US broadcaster that he was proud that the Bayraktar TB2 has become a symbol of the Ukrainian resistance against Russia, saying: “It’s very touching.”

A Baykar spokesperson, meanwhile, was cited by Middle East Eye as denying that the company had established a factory in the UAE.

However, the publication said a source with knowledge of the issue stated that Baykar was indeed in the process of establishing a production line in the UAE.

The Bayraktar TB2 drones have built up a proven track record of success amid military operations in the Libya, Syria and Nagorno-Karabakh conflicts in recent years. A thorough appraisal of their effectiveness in the Ukraine war is yet to be published, but TB2s appear to have been responsible for destroying a substantial amount of Russian military hardware in Ukraine.

Despite the provision of combat drones to Ukraine, Turkey has stuck with a politically neutral stance on the war, offering itself as an intermediary in efforts for peace. The Erdogan administration has said the supply of drones is a matter between the Turkish private sector and Kyiv.

However, when Erdogan visited Kyiv in early February, he and Ukrainian President Volodymyr Zelenskiy signed a deal for unmanned aerial vehicles (UAVs) developed by Baykar  to be manufactured in Ukrainian factories.

In October last year, Ukraine’s Motor Sich agreed to provide Baykar with 30 turboprop engines to use in its Akinci strike drones.

Erdogan's office said on July 27 Erdogan would meet Putin in the Russian Black Sea resort of Sochi on August 5.