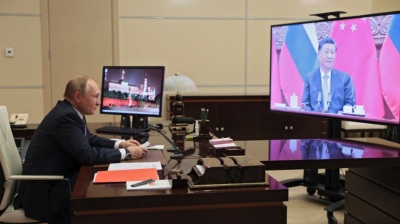 Russian President Vladimir Putin and his Chinese counterpart, President Xi Jinping, held an online meeting a week after Putin met Biden in a similar summit as the two countries increasingly co-ordinate their opposition to the US’ dominance of geopolitics. / kremlin.ru
By bne IntelliNews December 15, 2021

Russian President Vladimir Putin and his Chinese counterpart, President Xi Jinping, held a virtual summit on December 15 in a show of solidarity and in defiance of US pressure on Russia to pull back from its military build-up on Ukraine’s border.

The online meeting comes only a week after Putin held a similar two-hour virtual summit on December 7 with US President Joe Biden to discuss US accusations of a large-scale build up of Russian military near the Ukrainian border.

At that meeting Biden threatened Putin with “serious consequences” should Russia invade Ukraine. Putin said that Russia has no intention of attacking its neighbour, but expressed similar concerns with the number of unscheduled Nato and US naval exercises in the Black Sea and bomber flights close to the Russian border. Putin has demanded “legal guarantees” from Nato that there will be more expansion eastward. The Russian Foreign Ministry followed up with a five point list detailing Moscow security demands from the West.

Biden is believed to want to walk the Russian tensions back so that he can concentrate more fully on the US' rising rivalry with China, who is similarly threatening Taiwan, an important US ally, with military action. Beijing has long wanted to return Taiwan to Chinese control and military tensions in the South China Sea are currently also high.

Moscow has allied itself with Beijing as both countries are in dispute with the US and resent its domination of global geopolitics. Both have argued for a more multi-polar arrangement co-ordinated by organisations such as the G20 or the United Nations (UN).

“I consider our relations a true model of interstate co-operation for the 21st century,“ Putin said at the start of a video call in comments shown on the Kremlin’s website. “The close co-ordination between Russia and China on the international arena [and] the responsible joint approach to solving urgent global issues have become a stabilising factor in international affairs.”

Putin took some backhanded digs at the US by emphasising the non-interference and lack of criticism the two countries had shown each other.

“A new model of co-operation has been formed between our countries, based, among other things, on such principles as non-interference in internal affairs and respect for each other's interests, determination to turn the common border into a "belt" of eternal peace and good neighbourliness,” Putin said.

“Close co-ordination by Russia and China of their actions on the world stage, a responsible joint approach to solving pressing world problems have become a significant factor of stability in international relations. We are actively working together on the platform of the UN Security Council, in the Shanghai Cooperation Organization, in the BRICS association. We contribute to the formation of a just world order based on international law,” Putin added.

Putin also said he intends to fly to China in February to attend the Chinese Winter Olympics. The US government launched an effort to boycott the games last week, citing abuse of the Uyghur people by China. The US also boycotted the Russian winter games in Sochi following the passage of the so-called gay propaganda laws. Pointedly, Xi attended the Russian games in another show of solidarity.

“The parties officially announced the extension of the Treaty on Good Neighbourliness, Friendship and Cooperation between our countries, filling it with new content, reflecting the spirit of the times,” Xi said as cited by the Kremlin.

Following the meeting, top presidential aid Yury Ushakov said the two leaders spent some time talking about the US activity in the Asia-Pacific region, which they said was aggressive and destabilising the region.

In particular, they criticised the creation of the AUKUS (Australia, UK, US) naval alliance that will deploy nuclear submarines in the Pacific, and the Quadrilateral Security Dialogue (QUAD), a strategic dialogue between the US, India, Japan and Australia, both of which are designed to challenge China in the region, Ushakov said.

The two leaders agreed, Ushakov said, that the AUKUS alliance being created in the Asia-Pacific Region was undermining global nuclear arms non-proliferation and breeding tensions.

"The two leaders discussed that in detail," Ushakov said, adding that talks went on for more than one and half hours. “The time was enough to discuss virtually all crucial and important problems of bilateral relations and issues on the international agenda,” Ushakov said.

The two also agreed to build up their own alliances with other emerging markets that are designed to counterbalance the Western institutions and alliances. Moscow will provide Beijing with full support during its chairmanship of the BRICS (Brazil, Russia, India, China, South Africa) group in 2022, which started off as a marketing term from Goldman Sachs to sell stocks, but since has morphed into a political alliance of the leading emerging markets.

"The two leaders discussed co-operation within BRICS in considerable detail," he pointed out. Ushakov noted that China would take on the BRICS chairmanship in 2022. "Russia will fully co-operate with its Chinese partners in terms of their chairmanship.”

The two countries have also been building up their economic ties. From a mere $5bn a year in 1991, trade turnover between the two topped $123bn in November, the first time it has exceeded $100bn, Putin said to Xi, making China Russia’s biggest export and import market. Putin reiterated the plan to increase trade turnover to more than $200bn in the foreseeable future.

Russia has also become a major energy supplier to China after it built the Power of Siberia gas pipeline that is currently delivering 10bn cubic metres of gas a year. That is expected to ramp up in the coming years and plans for a second Power of Siberia pipeline to link China to the massive and largely untapped Yamal gas fields in Russia’s Arctic regions are also on the drawing board and likely to go ahead.

In a speech in September, Gazprom CEO Alexey Miller said that the Asian market has an “exceptionally large capacity” and made it clear that Russia is banking on expanding gas exports to China as those to Europe fall thanks to the EU’s Green Deal.

”There is no doubt that the Chinese market is the most dynamic and fast-growing one, and it shows simply unbelievable consumption growth rates every year. The year 2021 is no exception. In the first half of the year, natural gas consumption in China grew by 15.5%. The volume of imports increased by 23.8%. This means that China’s projected consumption based on the results of 2021 will amount to 360 bcm, and the volume of imports will total 160 bcm. Moreover, the annual volume of gas imports is expected to reach 300 bcm as early as by 2023, in just 15 years. The figure is just staggering,” Miller said.

For comparison, Russia expects to export some 100 bcm of gas to Europe this year.

More recently they have grown closer militarily as well conducting joint naval exercises in both the South China Sea and the Baltic Sea. Their arms also regularly exercise together. Russia remains a major arms exporter to China, although China has invested heavily in its own arms production, partly with the help of Russian technology.

Part of the Putin-Xi talks was scheduled to cover the military tension between Russia and Ukraine as “allies”, Kremlin spokesman Dmitry Peskov a day before the meeting.

"The situation in international affairs, especially on the European continent, is very, very tense right now and requires discussion between allies," Kremlin spokesperson Dmitry Peskov said, referring to Moscow and Beijing on December 14, as cited by Reuters.

"We see very, very aggressive rhetoric on the Nato and US side, and this requires discussion between us and the Chinese."