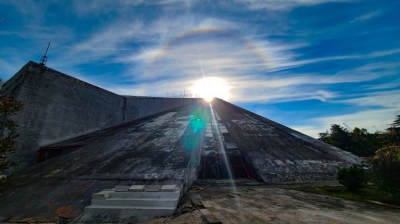 The building dubbed the Pyramid in Tirana, originally built as a museum to honour communist-era dictator Enver Hoxha, is being turned into the biggest digital education and innovation centre in the region.

The project is a collaboration between the city of Tirana, the Albanian-American Development Foundation and mobile telecom company Vodafone.

The Pyramid was designed by Hoxha's daughter and son-in-law and opened in 1988, three years after his death. After the collapse of communism, it was turned from a museum into a cultural centre, and at times has also housed a television station, offices, shops and night clubs, as well as serving as a Nato base during the war in neighbouring Kosovo. However, by 2020 it was largely unused.

There have been lengthy discussions about what to do with the Pyramid, given its close connection to Hoxha who kept the country isolated and its people repressed for decades. A previous government proposed demolishing it altogether to make way for a new parliament building.

“Today, this building that carries its very extreme history is at the same time the nest ready to host the next extreme. Extreme free space by creating the conditions for young people to enter the endless constellations of the digital universe,” said Rama at the ceremony.

“This building created to mystify the figure of Enver Hoxha and the time of a brutal dictatorship, today becomes ready to serve the exact opposite of all that system represented and with all that Enver Hoxha wanted, by giving young people the boundless freedom of challenging themselves and seeking the future.”

“Just over a year ago, AADF, Vodafone and the City of Tirana agreed to create space to foster tech innovation. Their co-operation is now turning that vision into a reality,” said US ambassador to Albania Yuri Kim, who attended the ceremony.

“I look forward to seeing this partnership – between government and business, and between Americans and Albanians – transform the Pyramid from a symbol of the dark past into an incubator for Albania’s bright future, one where Albania’s best and brightest learn to be the makers of their own history.”

The plan as designed by Rotterdam-based design firm MVRDV is for it to host a campus with classes for IT, robotics and design, as well as what Veliaj described as an “IT business and enterprise ecosystem” for start-ups. According to the Tirana mayor, many IT companies have already expressed interest.

Serpil Timuray, Vodafone Europe Cluster CEO, called the project “a symbol of how fast Albania is moving forward towards an exciting future," adding: "The digital society will require jobs and skills we have never seen before.”

The project will include a revamp of the outside of the building as well as its interior. Officials haven’t revealed the cost of the project, or how long it will take to complete.

BRICKS & MORTAR: Renovation of apartment buildings has biggest potential for energy saving in Western Balkans
Emerging Europe strong on women’s economic opportunities but dragged down by low pensions
VIENNEAST COMPASS: All in? Kosovo, Albania and the prospects of unification