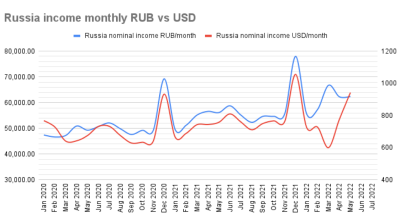 Real disposable income of Russians in 2Q22 declined by 0.8% year on year, as against a 1.2% decline seen in 1Q22. A fall of 5% in real incomes this year is expected, based on the CBR's forecast for nominal incomes and inflation. / bne IntelliNews
By bne IntelliNews July 29, 2022

Real disposable income of Russians in 2Q22 remained resilient and declined by 0.8% year on year, as against a 1.2% decline seen in 1Q22, and despite a greater fall in real wages of 6.1% in May, according to the latest data from RosStat statistics agency.

Real wages in Russia fell 6.1% y/y in May of 2022, following a 7.2% decline in the previous month and more than market expectations of a 4.4% drop. It was the second straight month of decline in wages.

Meanwhile, average nominal wages rose 10% from a year earlier to RUB62,457. In dollar terms, thanks to the strong appreciation of the ruble, nominal wages increased to $943 per month in May from $777 the month before, adding to the improving consumer sentiment. (chart)

The start of the war with Ukraine in February caused a shock and in dollar terms wages fell to $546 in March based on the average exchange rate for that month.

As followed by bne IntelliNews, the focus shifted on Russian macro statistics post-military invasion of Ukraine. While the consensus recession outlook on Russia for 2022 improved, some warned that the resilience is unevenly distributed and is skewed towards commodity exports.

The analysts surveyed by The Bell attribute the unexpectedly good real income results in 2Q22 to the “extraordinary” indexation of pensions and the subsistence wage of June 1, as well as redistributing insurance payments for employers to employee social funds.

These external support factors to disposable income risk delaying the structural decline that might overshoot on the downside in the near term, they believe. Still, unemployment in Russia is at a record low for the second month running (3.9% of the workforce), with the number of registered unemployed at 3mn Russians in June.

Romania’s public debt hits 50% of GDP at end-May
14 hours ago
Hungary's automotive industry continues to rebound in June
1 day ago
Russian GDP contracted by 4% y/y in the second quarter of 2022
1 day ago
Serbia’s annual inflation accelerates further to 12.8% in July
2 days ago
Poland’s CPI growth rate picks up just 0.1pp to 15.6% y/y in July
4 days ago